Australia boasts a vast and varied coastline with an abundance and diversity of whale and dolphin species.  Whale and dolphin watching is popular in many different locations in Australia, including Port Phillip Bay (PPB), a semi-enclosed bay offshore from Melbourne.  The bay hosts populations of three species of dolphins, common dolphins (Delphinus delphis), common bottlenose dolphins (Tursiops truncatus) and the recently proposed Australian bottlenose dolphin or burrunan dolphin (Tursiops australis sp. nov.)1.  Dolphin watching and swim tours started as a commercial activity in PPB in the early 1990’s, and includes both boat-based and in-water interactions with dolphin groups, concentrated primarily in the southern end of the bay2. By 1999/2000, eight permitted operators were offering dolphin watching tours (5 swim/sightseeing, 3 sightseeing). In 2001 the Dolphin Research Institute analysed data on dolphin interactions. The result was to set a limit on the number of dolphin swim-tour permits (4) to be issued for Port Phillip Bay for the 2003/04 season. A specific dolphin swim-tour permit application was developed, based on the existing Parks Victoria tour operator licence application. In 2007-2008 three operators were licensed to conduct boat-based activities accommodating an estimated 12,000 tourists over a six- month season2. As of 2013, the dolphin swim tour industry in PPB was capped at 4 licensed operators catering to around 11,600 tourists per year. In 2017 the Victoria Department of Environment, Land, Water and Planning (DELWP) issued four permits which are still current.

Located in such close proximity to the city of Melbourne and its outlying residential areas, the bay also hosts large volumes of commercial vessel traffic and extensive use of private recreational boats, particularly during weekends and holiday periods.  Realizing the potential negative impact of this volume of vessel traffic, studies were undertaken in PPB from 1998 onward to try and assess the potential impact of dolphin watching activities on the small resident population of bottlenose dolphins found there3,4.  This catalysed a process of adaptive management that has continued over the past 20 years. 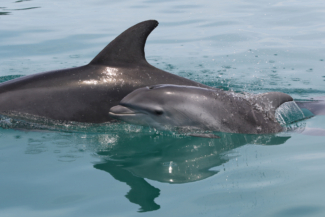 Dolphin watching in Port Phillip Bay, including swim-with tours, focuses on a resident population of Australian bottlenose dolphins. Pictured here are a mother and calf. Photo courtesy of the Dolphin Research Institute. 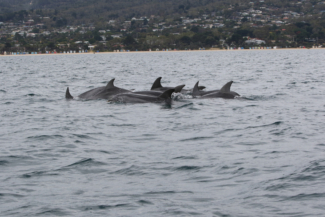 The dolphins inhabit nearshore waters used by both commercial and recreational boaters. Photo courtesy of the Dolphin Research Institute.

When dolphin watching first emerged as a commercial activity in PPB, there were restrictions under the Victorian Wildlife Act 1975 as well as Wildlife (Whale Watching) Regulations drafted in 1990 relating to approach distances between people and whales and dolphins.  However the legislation at that time did not have provisions to regulate or issue permits for the commercial dolphin swim/watching activity.

In the absence of any legally enforced regulations, operators in PPB established their own voluntary code of practice to govern the behaviour of tour operators around dolphins. Like many other voluntary codes, used in Australia and around the world, adherence to the code requirements varied, and this one was determined to be ineffective in protecting the dolphins from potential negative impacts5-7. It was abandoned in 1995.

In 1997/1998 the Victorian government established regulatory changes through the Wildlife (Whales) Regulations 1998, which required all dolphin sightseeing tour operators and dolphin swim tour operators to obtain a permit from the responsible department. These regulations included clear restrictions for private vessel and swimmer approaches to whales and dolphins as well as prescribed permit conditions and fees for whale and dolphin sightseeing and swim tour permits. Further amendments to the Wildlife Act in 2002 strengthened the ability to recognise and define offences relating to whale and dolphin tours and also introduced provisions which allowed for a ‘Limited Permit Area Determination’ to be established under which the number of permits can be capped for a specified area to ensure the permitted activity is ecologically sustainable.

As an additional protective measure, the Ticonderoga Bay Sanctuary Zone (TBSZ) was established, an area of roughly 2000 square metres inside the bay.  It provides a refuge area for dolphins within the bay, prohibiting tour vessels from approaching dolphins to within less than 200m when approach distances outside the Zone were only 50m for permitted tour vessels2 and 100m for private vessels.  Respecting the greater approach distances in the sanctuary constitutes another condition of permitting for whale watch operators2.

While these measures helped to regulate the whale and dolphin watching industry in Victoria, studies conducted by independent and government contracted researchers between 2000 and 2009 highlighted a number of ongoing concerns about the sustainability of dolphin watching practices in Port Phillip Bay3,8,9. Dolphins in PPB were found to be feeding less when vessels were present10 and increased their vocalizations when boats were present – possibly as an attempt to maintain group cohesion9.  In 1998-2000 approximately a third of all approaches to dolphins were illegal based on the requirements under the Wildlife (Whales) Regulations 1998, with the length of interactions being exceeded almost twice as often as they were adhered to, and approach guidelines for vessels and swimmers frequently disregarded3.  Researchers working in the TBSZ in 2007-2008 observed high levels of non-compliance from dolphin tour operators, including approaches to dolphins in the off-limits area within 100m of shore, frequent repositioning of vessels to allow swimmers a closer approach, and interactions with dolphin groups containing calves still showing foetal folds2.  Researchers concluded that while the legal frameworks in place before 2009 were mostly adequate, compliance with these measures was low due to operators’ perceived need to give their clients close encounters, and their perception that the risk of disregarding regulations was negligible due to low levels  of monitoring  and enforcement of compliance2,3,8,9.

Regulations under Victorian law expire after 10 years and need to be remade. In the lead up to the expiry of the Wildlife (Whales) Regulations 1998, between 2007 – 2009, the Victorian State Government conducted a review of its marine mammal regulations which looked at the effectiveness of measures in place to mitigate risks to marine mammals from human activities and interactions and risks to public safety from interactions with whales, dolphins or seals. The cost-benefit analysis conducted in the extensive review also considered the need to maintain a sustainable marine mammal tourism industry, and the need to minimise conflicts between marine mammal tourism and other human uses of marine waters, such as recreation, fishing and aquaculture.

The review of the regulations included extensive stakeholder engagement and public consultation through a Regulatory Impact Statement 11. After a one year extension on the former regulations, following the review, the Wildlife (Marine Mammals) Regulations 2009 were adopted. These are still in effect today and aim to strike a balance between the community’s desire to interact with marine mammals and the need to protect the health and wellbeing of marine mammals and the long-term viability of their populations. The regulations not only aimed to better protect the health of marine mammals, but to create a safer environment for people interacting with large whales, dolphins and seals. They also brought Victoria in line with national agreements on the management of marine mammals, endorsed by Victoria through the Natural Resources Management Ministerial Council.

The 2009 regulations helped to strengthen monitoring and enforcement measures, and targeted marine mammal compliance operations have been conducted on Port Phillip Bay annually since 2009.

Part of the dolphins' range includes the Ticonderoga Bay Sanctuary, where special measures are in place to protect them from disturbance. Photo courtesy of Troy Muir, Polperro Dolphin Swims. 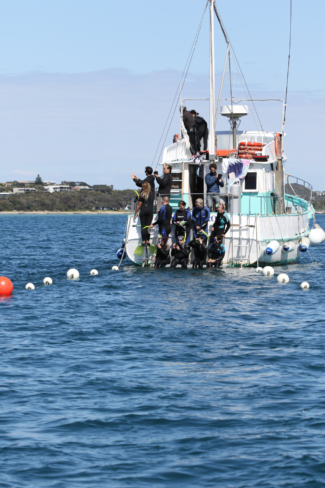 Only four licenses are granted to operators to offer swim-with dolphin tours. Tours are conducted under strict conditions to protect the safety of swimmers and the dolphins. Photo courtesy of the Dolphin Research Institute.

Victoria’s current regulations, the Wildlife (Marine Mammal) Regulations 2009 will expire in 2019, and as such, the Victorian Government will be preparing for another extensive review of current management measures.  This review is likely to take into account many of the lessons learned in PPB including research-based findings to ensure that the industry does not negatively impact the dolphin populations on which it relies.

One study that may be taken into account is a comparison of bottlenose dolphin sightings rates in PPB during two periods of study in 1998-2000 and 2011-2013. This found that both sightings rates and duration of encounters decreased significantly over time, a possible indication of long term impacts of repeated exposure to vessels12.  The same study found that approaches that followed guidelines were more likely to result in dolphins approaching vessels, whereas illegal approaches were more likely to result in avoidance12. Interviews conducted with tourists during the same time indicated that they place high value on respecting guidelines that protect the dolphins13.  The authors suggest that these findings can be used to educate operators and help to convince them that respecting guidelines should lead to greater client satisfaction, both because they are likely to have closer and more prolonged interactions, and because they will not want to contribute to potential negative impacts on the dolphins13.

The need for more educational outreach to promote compliance is supported by social research conducted by the Dolphin Research Institute in 2015/16 (unpublished). This research shows that more than 60% of the 170 respondents either didn’t know, or think that they can approach animals closer than the regulated distance.

As a result, DELWP is focusing on education - engaging with boaters at boat ramps and the annual boat show, as well as through media outreach. Educational outreach is supported by on-water patrols where compliance is monitored and the regulations are enforced. Anecdotal evidence from PPB and published studies elsewhere indicate that boaters are more compliant when agencies are present on the water14, so patrols in PPB are designed to be visible. Any observed or reported cases of non-compliance are investigated by DELWP.

Management measures employed in PPB to date have included a variety of the tools at managers’ disposal, such as voluntary guidelines, mandatory approach guidelines, regulations and license conditions, a determination limiting permit numbers, and time/area closures/sanctuaries. Any future management measures should continue to include cost recovery for commercial tourism (i.e. licensing fees for tour operators) so that government regulators are able to adequately resource monitoring and surveillance, as well as outreach and education.  Managers can also evaluate alternative and lower cost means of conducting monitoring and enforcement activities, such as land-based monitoring of the nearshore TBSZ to identify vessels that are not complying with regulations2.

For more information about management of dolphin watching in Australia Contact The Victoria Department of Environment, Land, Water and Planning on 136 186 or visit the DELWP website at: https://www.wildlife.vic.gov.au/wildlife-research-tourism-and-cinema/marine-mammal-tour-permits