Called the “last Eden” by some, Gabon is situated on the equator on Africa’s west coast.  Its terrestrial treasures boast 13 national parks covering 11% of the countries landmass, home to the world’s largest African forest elephant population, western lowland gorillas, chimpanzees, and countless bird and mammals species of high conservation value.  Gabon’s beaches host large populations of nesting leatherback and olive ridley turtles as well as surfing hippos and various other terrestrial wildlife that emerges from the rainforest where it meets the sea.  Gabon’s marine waters also host over 20 species of whales and dolphins, including the critically endangered Atlantic humpback dolphin1, and humpback whales that migrate from their feeding grounds in the Antarctic to mate, give birth and nurse their young in the Gulf of Guinea2,3.  Since 2012 the country has been undergoing a concerted effort to promote conservation of marine habitats through its Gabon Bleu (Blue Gabon) initiative, which has led to the declaration of 27% of Gabon’s marine waters as marine protected areas.

Although various dolphin species are present off the coast of Gabon year-round, whale watching tours are generally only conducted between July and September, during the peak seasonal abundance of humpback whales2,4.    Tours are conducted form the capital city of Libreville, where a few licensed tour operators use small- to medium sized sport fishing vessels to take groups of up to 10 or 15 tourists out to see the whales. A smaller number of operators offer tours from the country’s second largest city, Port Gentil, and tours are also sometimes run from resorts situated at the northern end of Loango National Park. Whale watching also occurs in Mayumba National Park, with one recognized tour operator or through informal arrangements with fishermen who take tourists out in their small open-decked fiberglass fishing boats, and may not meet international safety standards.  Additional species such as bottlenose dolphins, Atlantic spotted dolphins, or the critically endangered Atlantic humpback dolphin can also be observed opportunistically during whale watching or game fishing tours.

Additional information about whale watching opportunities in Gabon can be found on the The Wildlife Conservation Society, Gabon website. 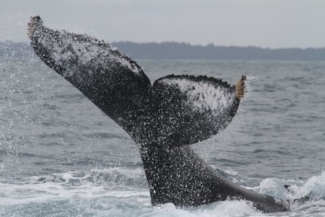 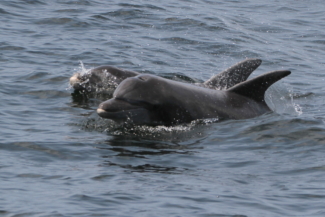 Bottlenose dolphins off the coast of Gabon. Photo courtesy of Gianna Minton/WWF Gabon.

There are currently no legally enforced whale watching guidelines in Gabon. The Wildlife Conservation Society in Gabon has worked with whale watching operators to try and promote responsible whale watching practices, and have produced a poster that has been shared in electronic and paper format with them. The NGO is working with the relevant government authorities as part of the country’s Gabon Bleu (Blue Gabon) initiative to translate the voluntary guidelines into a legally enforceable code. 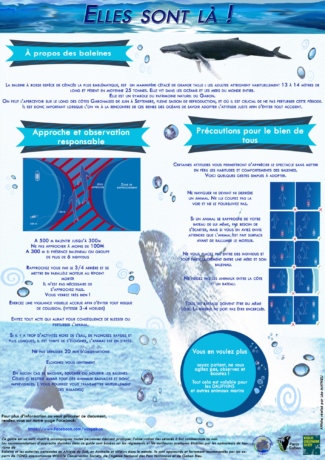 A voluntary code of whale watching conduct promoted by the Wildlife Conservation Society, Gabon’s National Parks Agency, and the Department of Fisheries.