Egypt’s Red Sea coast has grown rapidly as a tourism destination since the 1970-80s. Coastal development has boomed to accommodate international tourists in the areas of Sharm El Sheikh, and later Hurghada, Marsa Alam and Berenice. Tourism in these areas is almost exclusively focused on marine activities. Initially the focus was on diving and snorkeling on coast’s many fringing and offshore reefs and islands, but increasingly, marine tour operators have taken advantage of the presence of dolphins in many tourism areas to offer boat-based or swim-with dolphin watching tours in addition to their snorkeling and diving activities.

Sixteen species of cetacean have been recorded in the Red Sea, including spinner, spotted, bottlenose and Risso’s dolphins, and occasionally false killer whales, Bryde’s whales or even (rarely) humpback whales1,2.   Of these, only spinner and Indo-Pacific bottlenose dolphins are regularly targeted for dolphin watching activities.

The Mediterranean coast of Egypt also hosts some important tourist spots, such as Alexandria and Marsa Matrouth, however no regular whale or dolphin watching occurs in these areas.

Spinner dolphins and Indo-Pacific humpback dolphins are most targeted for in-water interactions in the locations indicated in the table below. These species are also occasionally, but less predictably observed in other resorts and bays. While dolphin watching and swim-with dolphin tours occur year-round, there is a peak in the northern hemisphere summer months, coinciding with European holiday periods and even warmer temperatures in the Red Sea. 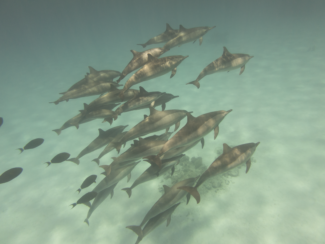 Additional information about whale watching opportunities in Egypt can be found on the following websites:

In some sites dolphin watching is tightly regulated and managed, as is the case in Samadai Reef, which has been designated as a protected area with controlled times and conditions under which swimming with dolphins can take place. In other areas, the Hurghada Environmental Protection and Conservation Association (HEPCA) has developed a code of conduct, which was later formalized into a Decree enforced in the Red Sea Governorate, for vessel and swimmer interactions with wild dolphins. Failure to respect this code can incur a fine of 10,000 Egyptian pounds (approx. 560 USD).  The code of conduct for vessels stipulates that they should:

The Code for swimmers includes the following:

Research on Dolphin Watching in Egypt

Research on dolphin watching in Egypt has focused on the impacts of swimming with spinner dolphins on the Samadai and Satayah reefs, with researchers generally concluding that the management systems in place in Samadai are working well to limit impacts3,4, but that the Satayah population is under unsustainable levels of pressure and improved management measures are required5. In the area of Hurghada, the NGO Dolphin Watch Alliance, in collaboration with local and international partners, is conducting a long-term monitoring of the Indo-Pacific bottlenose dolphin population using mark-recapture techniques and, more recently, behavioural studies to describe responses to human interactions6.