Killer whales, also known as orcas, are an iconic species, long revered by various aboriginal cultures and frequently the stars of animal performances at marine parks. The species has recently made even more famous by films like “Blackfish” and “Free Willy”.  Technically, it is the largest dolphin species, but is called a whale because of its large size. It is the most widely distributed of all whale and dolphin species and can be found in every ocean basin and several semi-enclosed bodies of water like the Arabian Gulf and parts of the Mediterranean.  Killer whales are highly distinctive and easily recognisable.  Although still considered a single  species, there are at least eight different recognised forms– differing in external colouring and appearance, feeding habits and ecology.  Two unnamed subspecies are recognized off the West Coast of North America – mammal-eating ‘transient’ and fish-eating ‘resident’ killer whales.   While in many parts of their range they are highly mobile and their locations are difficult to predict, there are a few places where they are either resident or predictably present in certain seasons, and are one of the main attractions of whale-watching tours. 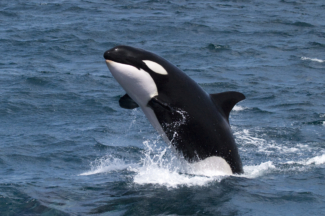 Killer whale in off Eritrea. Photo courtesy of Chris Johnson.

Can be confused with

Killer whales would be difficult to confuse with any other species in their range. From a distance, a group without adult males might initially be confused with Risso’s dolphins due to the prominent dorsal fins.  But once the bodies are visible, the distinctive black and white markings will distinguish killer whales from any other species.

Killer whales are found all over the world. Although they are more densely concentrated in colder regions where their large prey species are more abundant, they appear to roam temperate and tropical areas as well, taking advantage of temporary or seasonal feeding opportunities1,2. 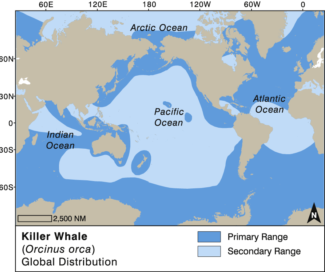 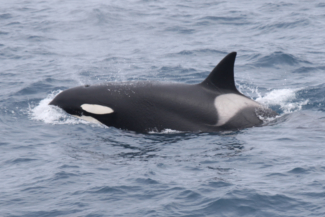 Different populations of killer whales around the world have developed different prey preferences that seem to shape their behaviour, ranging patterns and, some would argue, their culture.  ‘Resident’ killer whales off the coast of British Columbia, Canada, feed on fish – predominantly salmon.  These are some of the best-studied killer whales in the world, as they have a restricted and predictable home range. But their dependence on salmon stocks, which are drastically declining, is putting the population at risk of extinction.   Another population of killer whales with a much larger range that overlaps with residents is 'transient’ or Bigg’s killer whales. They feed predominantly on marine mammals, including dolphins, seals, and whales  - particularly gray whale calves on their northward migration.  Killer whales off the coast of Norway feed on herring and other fish, while those in  Patagonia (Argentina) are known to beach themselves in the process of taking sea lion pups in shallow water.   Others in Antarctica have developed the tactic of creating waves to wash seals off ice floes1.

Killer whales live in tightly bonded family groups.  Females typically give birth to their first calf at 12-14 years, and have one of the longest gestation periods known for whales and dolphins at 15-18 months3.  Calves usually nurse for up to one year, and begin to supplement their diet with solid food sometime before they are weaned.  Even after they are weaned, however, calves are usually dependent on their mother at least until the next calf is born – which is an average of 5 years after the previous calf.  This relatively long period of dependency may be linked to the need for mothers to teach calves how to hunt different types of prey.  Females give birth to an average of 5 calves over a period of 25 years, and then enter into a period of decades during which they no longer have calves, but play an important role in the family group – “babysitting” the calves of other females.  Along with pilot whales and sperm whales, this is the only mammal species other than humans, where females are known to have an extended post-reproductive period (menopause)4.

Killer whale groups also have distinct ‘languages’, and even groups with overlapping ranges, like the resident and transient whales off of British Columbia, appear to be socially separated by completely different call structures5. 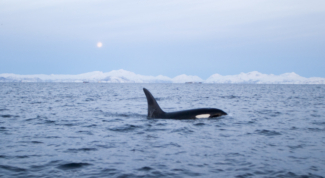 Killer whale off the coast of Norway: Photo courtesy of Chris Johnson 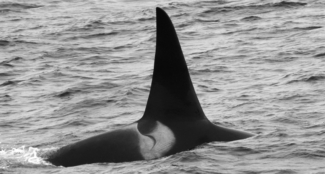 One of the most important tools for studying killer whales is photo-identification.  Nearly every individual killer whale is recognizable by the scarring and shapes of their dorsal fins and the saddle patches behind their dorsal fins.  In some populations photo identification has been used to follow the life histories of individual whales for more than 35 years6.  More information about research techniques used to study whales and dolphins can be found here.

Killer whales have no known natural predators except possibly other killer whales.

Although killer whales, with their bulk and strength appear to be less susceptible to bycatch in fisheries gear than other species of whales and dolphins, fishermen often perceive them as a threat and sometimes shoot at them in areas where they take fish off their hooks7.  Killer whales are also known to be vulnerable to declining food sources – such as Chinook salmon in coastal British Columbia and Washington State and bluefin tuna near the Strait of Gibraltar8,9 , both of which have been linked to a decline in killer whale numbers10.

As top predators, killer whales are also vulnerable to bioaccumulation of contaminants that are concentrated through each level of the food chain11,12. Killer whales have also been shown to be vulnerable to vessel traffic, including whale watching vessels13,14.

Killer whales were actively hunted in a Norway, Japan, the Soviet Union and the Antarctic through until the 1980’s, but are now only taken in small numbers for food (or as a population control measure) in coastal fisheries in Japan, Greenland, Indonesia, and the Caribbean islands15. Killer whales are considered Data Deficient on the IUCN Red List of Threatened species16.  The eight currently recognized forms17 range so widely over so many different habitats that their population status is difficult to assess.  In 2006, it was estimated that the worldwide poulation of killer whales was at least 50,0002, but only a few populations have been well enough studied to generate reliable abundance estimates.  Killer whales are listed in Appendices I and II of the Convention on Migratory Species (CMS). The eastern North Atlantic as well as the eastern north Pacific populations are included in Appendix II of CMS. 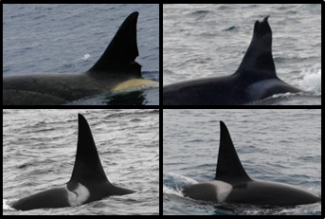 Examples of killer whale photographs used to recognise individuals over time through their dorsal fin and the saddle patches/blazes behind their dorsal fins. Images from IWC-POWER research cruises. 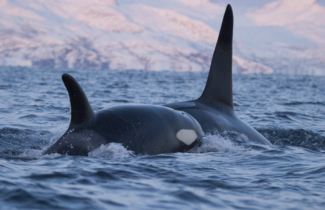 Perhaps the most watched killer whales in the world are those that are the focus of whale-watching tours in British Colombia, Canada, and Washington State, USA.  Tours in this region target two different populations of killer whales, Bigg's transient killer whales, and Southern Resident Killer whales.  The latter have been the subject of numerous studies assessing the impact of whale watching on this vulnerable population, with researchers drawing the conclusion that the short term disturbances caused by vessel presence may jeopardize the population18-20. The results of these studies have led to numerous management measures intended to reduce disturbance, and monitoring of the population is ongoing, with whale watching operators focusing more on the healthy population of transient killer whales in the area. Killer whales are also targeted for research and whale-watching activities during live-aboard cruises in Antarctica.  Research also provides recommendations on the number of boats, distances and noise levels that are less likely to cause serious disturbance, and thus provides useful data for the development of guidelines  to limit the potential impact of whale watching on whales’ long term well-being and survival18,21,22.  Land-based whale watching on the west coast of the US and Canada, as promoted through the Whale Trail, provides a completely impact-free way of observing these magnificent creatures. 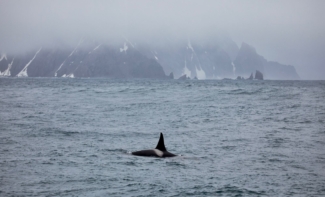 Killer whale viewed during a live-aboard cruise in the Antarctic. Photo courtesy of Chris Johnson.