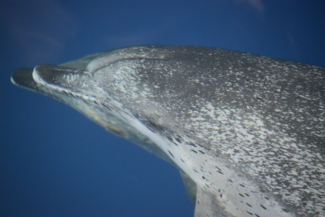 Note that Atlantic spotted dolphins are generally shorter but more robust than pantropical dolphins – with a chunkier body and thicker beak (see some of the photos below). Their colour pattern progresses over time from un-spotted to spotted .

Spotted dolphins have ranges that overlap in the tropics with a few different species that have similar characteristics, and they can be very challenging to distinguish at sea.  Pantropical spotted dolphins often overlap in range with spinner dolphins, which have a more slender hooked dorsal fin, longer slimmer beak, and (usually) a clear three-banded or tripartite colour pattern. Atlantic spotted dolphins, when fully grown have more pervasive spotting than pantropical dolphins, a shorter, stouter beak and more rounded head, and longer, less sharply curved flippers.  Atlantic spotted dolphins are more robust than their pantropical cousins, and do not develop spotting until later in life. As a consequence, unspotted juveniles and sub-adults can easily be confused with smaller forms of bottlenose dolphins where both species occur. While bottlenose dolphins tend to be larger and more robust than spotted dolphins, a trained eye may be required to distinguish them at sea.

Pantropical spotted dolphins (Stenella attenuata) are found in the Pacific, Atlantic and Indian Oceans, as well as the Persian Gulf and Red Sea.  They are generally limited to latitudes between 40°S and 40°N.  They are mostly found in deep offshore waters, although they can be observed around oceanic islands or other coastlines where there is deep water near to the coast (such as Central America and Mexico, the Hawaiian Islands, Taiwan and the Philippines)2-4. The Atlantic Spotted dolphin (Stenella frontalis) is limited to warm-water regions of the Atlantic.   Both species are absent in the Mediterranean Sea.3,5,6. In the Bahamas a population of Atlantic spotted dolphins unusually spends a lot of time over sand flats in water only 6-12 m deep, rendering them more available for detailed study than most other spotted dolphins6. 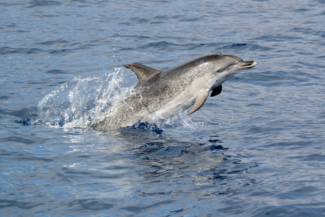 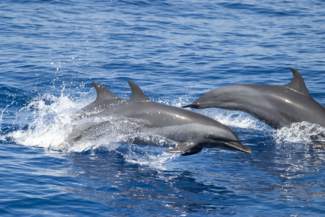 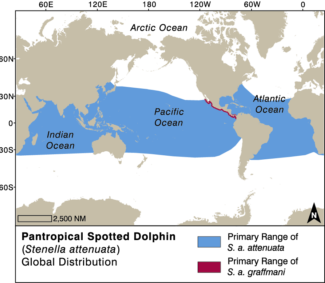 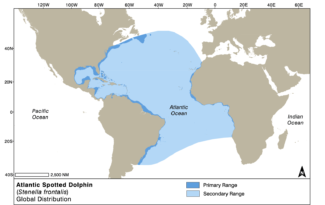 Pantropical spotted dolphins feed on small schooling fish, and sometimes squid or crustaceans that live in the deep scattering layer – a dense layer of small marine animals of many different species that descends during the day and rises toward the surface at dusk to feed on plankton7.  This diet brings pantropical dolphins into frequent association with various species of tuna, as well as spinner dolphins and other oceanic predators that feed on the same prey3,8.  Atlantic spotted dolphins have similar diets in their open ocean habitats, but may feed on a wider variety of bottom-dwelling fish and invertebrates when closer to shore.5  Atlantic spotted dolphins are also known to form large mixed species groups with common dolphins, bottlenose and striped dolphins in response to prey availability9.

Different populations of spotted dolphins around the world appear to have evolved different social structures and habits.  Nearshore Atlantic spotted dolphins in the Bahamas comprise one of the best studied populations of the species group with long-term studies completed on their social structure and communication 10,11. Yet, little is known about Atlantic spotted dolphins’ life history: Females are thought to give birth an average of once every 3 years, and nursing is thought to last up to five years5.  Much more is known about the life history of pantropical spotted dolphins, due to the high number of dead dolphins that have been examined by scientific observers in the Eastern Tropical Pacific (ETP) tuna fishery12.  Gestation is 11.2-11.5 months, and females have calves every 2-3 years.  Calves are normally weaned at 9 months but can continue nursing for up to 2 years3. 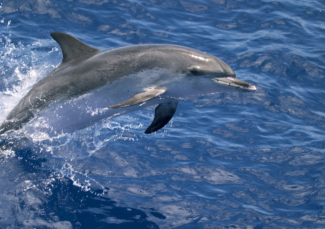 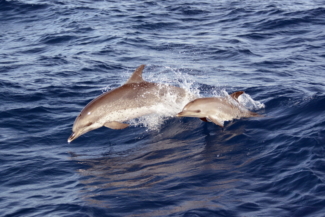 Pantropical spotted dolphins have been subject to direct takes in Japanese drive and harpoon fisheries.  They are also the species most severely impacted by entanglement in tuna purse seine fisheries in the Eastern Tropical Pacific (ETP).  Because of the species’ frequent association with tuna schools, purse seine fishers look for the dolphins at the surface of the water, and intentionally set their nets around the school of dolphins, encircling them together with the tuna. Between the 1959 and 1972 over three million pantropical spotted dolphins were killed in the tuna fishery in the ETP13.  Since then, various measures have been put in place to reduce the levels of mortality, including changes to the fishing gear and procedures that allow dolphins to escape the nets.  Reported dolphin deaths in the ETP are now thought to be sustainable, with only a few thousand individuals per year, rather than hundreds of thousands, but the ETP spotted dolphin population does not appear to be recovering as quickly as would be expected14.   There is concern that their interactions with tuna fisheries, even if no longer fatal, still cause stress that reduces their fitness and ability to reproduce15.  Both species of spotted dolphins also suffer mortality from bycatch in other fisheries throughout their range.3

Despite the heavy rates of mortality suffered by pantropical spotted dolphins in the 1960‘s and 70’s, the species is thought to be one of the most numerous dolphins in open ocean habitats throughout the tropics.  It is designated as Least Concern by the IUCN Red List of Threatened species, and is on Appendix II of the Convention on Migratory Species (CMS).  Atlantic spotted dolphins have not been studied in enough detail to generate population estimates throughout most parts of their range, and are designated as Data Deficient on the IUCN Red List.  They are not listed on either appendices of the CMS. 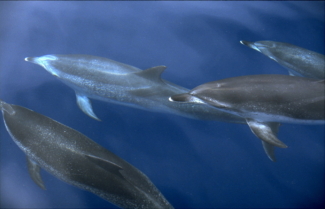 There are few places in the world where spotted dolphins are the primary target of dolphin watching activities, but they are often observed off the coasts of central and south American countries like Peru, Panama, Costa Rica and Colombia, and are frequently spotted in the Canary Islands16 (Spain) and the Azores (Portugal).  Resident populatinos in the Caribbean have been the focus of long-term studies on communication and dolphin associations11,17. 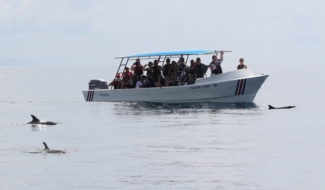