Whale watching had just started here and long range trips from San Diego brought Americans to see gray whales on their mating and calving lagoons. Initially the protection of the gray whales and the lagoons was only superficial - on paper. However, in 1979 and 1980, protection of nearby Laguna San Ignacio and Guerrero Negro followed, and in 1988, the entire lagoon complex was officially designated as El Vizcaíno Biosphere Reserve. UNESCO World Heritage status followed in 1993.

The first trips were in the 1970’s. US tourists travelled  from San Diego on self-contained 7 to 10-day cruises down to the lagoons of the Baja California coast1. Local Mexicans earned nothing from the trips but these pioneer journeys at least showed that there was a market for whale watching in Mexico and helped to promote more whale watching tourism through word of mouth. In the late 1980s one of the US companies began hiring local Mexican boats to take tourists into the lagoons; at the same time tourists began arriving overland and hiring boats on the spot. In 1991, partly as a trade-off for banning fishing in the lagoon during the tourist season, locals were given the sole permits to work as skiff drivers in the lagoon. The outside companies and cruise ships had to hire the pangas and their drivers.  From the late 1980s onwards, local Mexicans began to profit more directly from whale watching, by offering tours from their own boats to tourists arriving by land, air and sea.  Over the past two decades, the industry has grown and diversified, spreading out from the initially targeted lagoons to southern and eastern Baja and the mainland coast, especially around Puerto Vallarta.

Mexico is now one of the top ten tourism destinations in the world and the high volume of international tourism has helped Mexico to become the most popular whale watching destination outside the United States2. 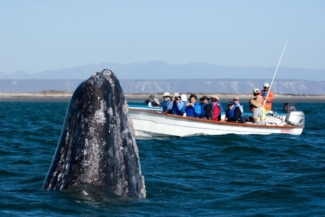 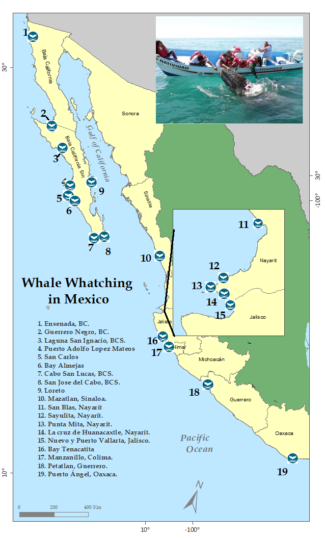 Additional information about whale watching opportunities can be found on this external website.

In the 1970’s, whale watching in Mexico was uncontrolled, but later the establishment of MPAs helped provide the context for the establishment of local laws and enforcement to control boat traffic, fishing gear and nets used in the lagoons, as well as pollution from local settlements and industrial degradation of the surrounding land areas. The MPA also closed some sensitive gray whale habitats entirely to tourism, providing zoned protection which many researchers and MPA practitioners believe is a good way to manage whale watching.

Mexican national law (NOM-131-SEMARNAT-2010), establishes guidelines and specifications for the development of whale watching activities with the aim of protecting and conserving the whales and dolphins and their habitat. Whale watching vessels must all be authorized by the Secretaria de Medio Ambiente y Recursos Naturales (SEMARNAT). Depending on the species, vessels must respect established minimum distances (between 60-100 m) and maintain speeds below 9 km/hr when transiting through a whale or dolphin area, and 4km/hr when in the presence of whales.  Vessels should also avoid sudden changes in direction and speed.  A maximum of 4 boats may approach a single whale or group of whales at one time, and the guidelines recommend special care around more vulnerable mothers with calves. Whale watching in waters less than 10 meters deep can only be conducted from smaller vessels. (Click here to see this legislation).

Management of whale watching in Mexico has also had to take into account the balance between foreign (US-based) investment and marketing and benefits to local communities and economies. US tour operators played a crucial role in the development of Mexico’s whale watching industry by attracting the "tourism pioneers." These early ecotourists, visited the lagoons and told others, helping t make the place popular and establishing the location internationally.  Live-aboard cruises from San Diego still bring tourists to the lagoons but there is now more integration and cooperation with local communities. The challenge in Latin America and other countries where whale watching is developing is how to involve outside operators with a good business sense without them taking over completely. An effective permit system and/or management through an MPA can restrict the number of large operators allowed to operate in a particular area, and ensure that the majority of permits are awarded to local people, as has been done in the Saint Ignacio Lagoon, Mexico2. 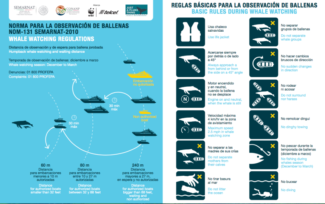 Information produced by the government and NGO partners to promote responsible whale watching tourism in Mexico. 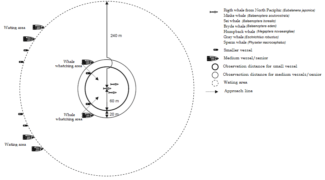 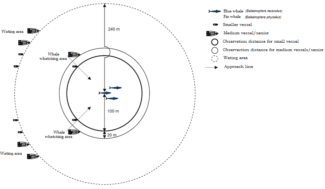 Examples of approach diagrams from the Meixcan whale watching regulations

Research on whale watching in Mexico

Given the country’s long history of whale watching, a number of studies have been conducted on the industry’s sustainability and impact.  Studies include: 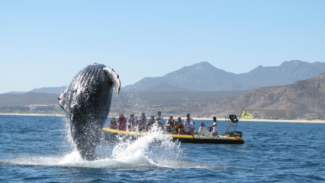