Humpback dolphins are found in relatively shallow nearshore waters throughout their range which includes most of the coastlines in Australia, Africa and Asia. Their dependence on nearshore habitats brings them into contact with many types of human activities, putting them at risk from fisheries entanglement, boat traffic, pollution, and habitat loss.  However, this habitat selection also makes them easy to observe from shore.  There are four recognized species of humpback dolphins with very little overlap between their ranges: the, Indo-Pacific humpback dolphin (Sousa chinensis), the Indian Ocean humpback dolphin (S. plumbea) the Atlantic humpback dolphin (S. teuszi) and the Australian humpback dolphin (S. sahulensis)1.  Because they tend to be relatively shy, and less active than the bottlenose dolphins with which they often share territory, this species is not often the primary target of dolphin watching tours.  However, they can be encountered in nearshore waters, and in some areas, like Hong Kong, and the Musandam Peninsula of Oman, they are the stars of the show. 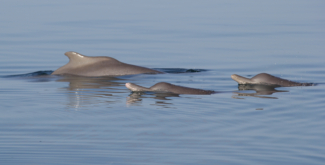 In general, the pink coloration of adults and/or the presence of a hump under the dorsal fin will make humpback dolphins easy to distinguish from any other medium to large dolphin in their range, which most often overlaps with coastal forms of bottlenose dolphins, finless porpoises, and Irrawaddy or snubfin dolphins.  Some populations of Indo-pacific humpback dolphins (e.g. off the coast of peninsular Malaysia) have smaller, less pronounced humps under their dorsal fins, and young individuals that are still evenly grey in colour may initially be difficult to distinguish from bottlenose dolphins. However, the longer, flatter rostrum, the broad base of the dorsal fin, and the presence of other individuals with mottling and/or more pronounced humps should differentiate humpback dolphins.

Humpback dolphins are limited in their range from the West coast of Africa in the West to the coast of China and the east coast of Australia in the East and are always found in shallow nearshore waters.  The four different species have distinct geographic ranges as follows: 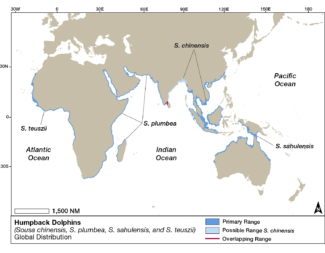 Humpback dolphins seem to be fairly adaptable in their diet, with studies from South Africa, Hong Kong, Australia and Oman revealing a variety of fish species, and sometimes crustaceans, squids, octopus and cuttlefish in the stomachs of by-caught or stranded animals2-6.   Humpback dolphins use a variety of feeding techniques, including partially stranding themselves on shore while chasing fish7.  In some locations, humpback dolphins are also known to follow fishing trawlers in order to opportunistically feed on discarded and escaped fish8.

Humpback dolphins usually occur in small groups of 2-6 individuals, but larger aggregations of up to 30 or 50 individuals have been recorded from Oman9,10, and Malaysia11, and over 100 individuals from Bangladesh8.  Males often show scarring consistent with aggression within their own species – such as tooth rakes on their dorsal fins12.  The species also appears to interact with other dolphin species in its range, with a number o documented cases of both benign and aggressive interactions between bottlenose dolphins and humpback dolphins10, and the apparent incorporation of an Irrawaddy dolphin into humpback dolphin groups in two different sites in Malaysian Borneo13,14.  Females of all four species are thought to reach sexual maturity at 9-10 years.  In Hong Kong and South Africa, calves are predominantly born in the spring and summer, but little is known about the seasonality of reproduction or other life history characteristics of Australian or Atlantic humpback dolphins7,15. 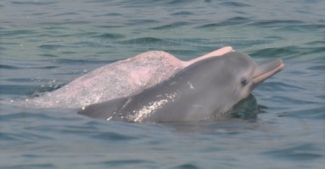 As with many other species of whales and dolphins, individual humpback dolphins can be recognised from the unique patterns of scarring and pigmentation on their dorsal fins.  Researchers build up catalogues of known individuals and track them over time. Because almost all humpback dolphin populations have fairly stable nearshore home ranges, they provide excellent subjects for long-term monitoring, including studies of social structure, reproductive parameters, residency and range16,17. Because their nearshore habitat also brings them into contact with human activity, they are also the focus of studies that try to assess the potential impact of coastal development and other threats on dolphin populations18.  For more information about methods used to study whales and dolphins click here.

Humpback dolphins’ main natural predators are sharks, with one photo-identification study in Australia revealing that 46% of sampled humpback dolphins had scarring associated with shark attacks19.  Great white, tiger, and bull sharks are thought to be the species most likely to pose a risk to (young) dolphins.7

Humpback dolphins throughout Africa, Australia and Asia often live in close proximity to densely populated urban areas.  In developed areas, like Hong Kong, their habitat is continually affected by coastal construction and high volumes of vessel traffic. In developing countries, their distribution often overlaps with areas where fishing effort is exponentially increasing7,20.  As with almost all species of whales and dolphins, accidental entanglement in fishing gear – or bycatch- is the leading source of human-induced mortality for humpback dolphins21, but coastal development18, pollution22-24, and in some areas, such as West Africa, direct hunting25 also pose serious threats. 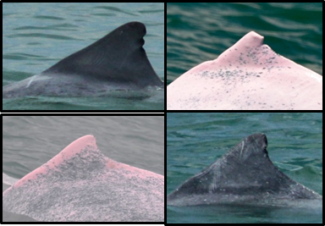 Individual humpback dolphins can be recognised by the nicks and scars on their dorsal fins, through a process called photo-identification. These are Indo-Pacific humpbacks from Malaysian Borneo. Photos courtesy of Sarawak Dolphin Project. 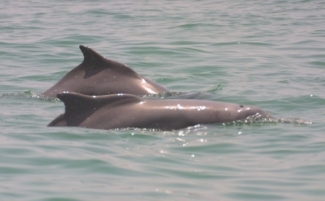 Despite the fact that humpback dolphins are found near shore- and thus in theory easily accessible for dolphin watching - because they are generally less approachable and less acrobatic than other species, they are not often the primary target of whale and dolphin watching activities.  There are a few locations where the species is regularly encountered during marine and coastal tourism activities, and some where they form the focus of tours, such as India33, Hong Kong34 and mainland China35 and the Musandam Peninsula in Oman.  Studies on the potential impact of boat-based tourism on humpback dolphins are limited, but include studies in Hong Kong36 and Zanzibar37,38 that found that dolphins’ behaviour was likely to change in response to fast-moving vessels. Given humpback dolphins’ poor conservation status, their complete reliance in near-shore habitats and their generally restricted home ranges, the implementation and enforcement of clear and precautionary whale watching guidelines are particularly important for this species. 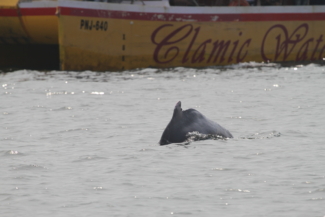 Humpback dolphin and dolphin watching vessel off the coast of India. Photo courtesy of Dipani Sutaria.