In recent years the Sultanate of Oman has successfully capitalized its impressive natural landscapes and resources to attract tourism from all over the world.  Efforts have been made to preserve the country’s culture and heritage whilst increasing tourism infrastructure to cater for a growing number of visitors each year.  Similar to other tourism trends in the country, the whale watching industry in Oman started with a single operator in 1998 and rapidly developed to a peak of 16 operators working in the country’s capital, Muscat, in 2014. As of January 2018, the number of operators in Muscat had dropped to approximately 11 operators, but full-time or ad hoc operators have started to offer tours in Musandam, Ras al Hadd, Masirah Island and Dhofar.  Most of these operations target coastal dolphins, but one emerging operator is focusing on the unique non-migratory population of humpback whales in the Arabian Sea.

Dolphin watching tours from Muscat typically last for 2 hours, or longer if they are combined with snorkelling or other types of coastal sight-seeing.  Vessels used for tours around the country range in size from small, open-decked boats with outboard engines to larger traditional wooden dhows.

Indo-Pacific humpback dolphins (Sousa plumbea) and Indo-Pacific bottlenose dolphins (Tursiops aduncus) are year-round targets in shallow water inlets of the Musandam peninsula in northern Oman and either or both species are a seasonal (September to May) target along the shores of mainland Dhofar in the south of the country, especially Ras Nuss, Taqa, Salalah and Mughsayl. Arabian Sea humpback whales are opportunistically encountered almost exclusively in Dhofar, and are a target of a small-scale marine tourism business in the Hallaniyat Islands. 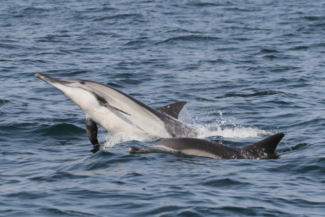 Common dolphins off the coast of Muscat. Photos courtesy of Gianna Minton 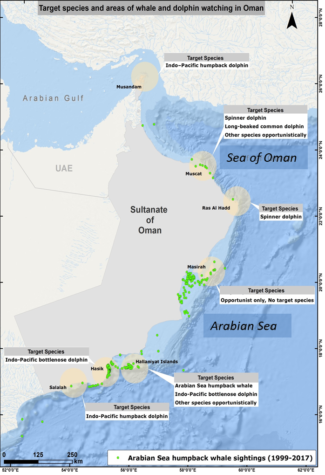 Additional information about whale watching opportunities in Oman can be found on the following Oman Tourism website.

Guidelines for whale and dolphin watching in Oman were developed in 2014 as part of an IWC-supported project that also included awareness-raising and initial training of tour operators and vessel captains in Muscat and Dhofar.  These draft guidelines are undergoing review and consideration for formal adoption by the relevant government departments.

The draft guidelines include speed restrictions (maximum 4knots) in the presence of whales or dolphins, approach guidelines (depicted in the diagram here); minimum approach distances (50m for dolphins and 100m for whales), and a maximum time limit of 30 minutes for interactions.

These guidelines are of the utmost importance for any emerging or future operations focusing on Arabian Sea humpback whales, as the population along the coast of Oman has been determined to number fewer than 100 individuals, and is designated as Endangered on the IUCN Red List of Threatened Species1.  It is important that whale watching activities do not contribute to the threats facing this population, which also include entanglement in fishing gear, the risk of vessel strike and exposure to underwater noise from shipping, and habitat loss or degradation from other forms of coastal development2-4. 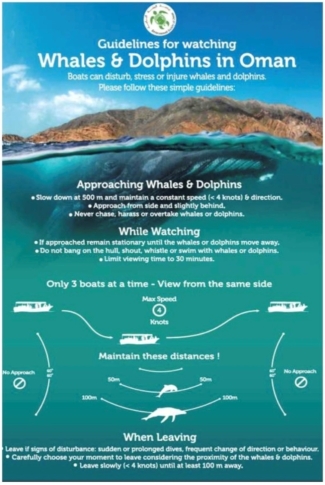 Research on whale watching in Oman

Reviews of the development of whale and dolphin watching in Oman, with a focus on its potential impacts on Arabian Sea humpback whales were presented to the International Whaling Commission in 2015 and 20175.   A formal study, published in 2011, described the state of dolphin watching tourism in the Muscat area and made a number of recommendations for improved management of the industry.  The study found that operators were not including any formal education or interpretation in their tours, and that boats were frequently crowding dolphins and approaching too closely, too quickly, or from the wrong angles6. Recommendations included the need to develop and apply guidelines to minimize the impact of tour vessels on target species, to better train boat drivers and captains in approach methods, and to include more targeted education and awareness during dolphin watching tours6.  These observations and recommendations were reiterated in a 2017 review, and a suggestion was made to use whale and dolphin watching tours as platforms of opportunity to collect valuable data that can be used for conservation and management5. 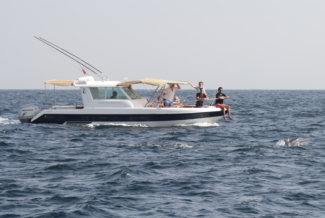