False killer whales are so named because the shape of their skulls, not their external appearance, is similar to that of killer whales.  Reaching up to 6 meters in length, the species behaves much more like a smaller dolphin, swimming quickly, occasionally leaping, and sometimes approaching whale watching vessels.

False killer whales are generally found in tropical and temperate waters between latitudes of 30°S and 30° N.  They are uncommon and poorly studied in most regions. While they appear to occur more frequently in deeper open ocean waters, they can occasionally move into nearshore areas. 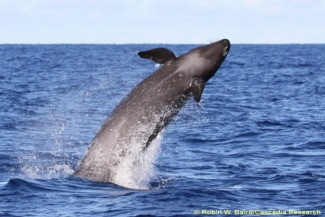 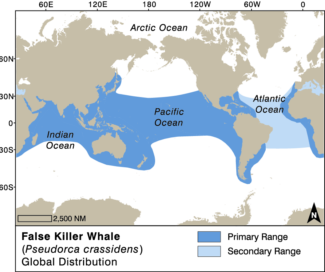 False killer whales feed on a variety of fish and squid, sometimes taking large fish species like mahi-mahi, tuna, and other predatory fish like sail fish1-4.  These feeding habits often bring them into contact with longline and other hook and line fisheries targeting these large fish species, and put them in conflict with fishermen when they steal fish from the lines (a phenomenon called depredation)5-7.  While false killer whales have been known to attack and consume other small dolphin species as these are being released from purse seine nets in the Eastern tropical Pacific, and may harass other larger whales, they are more often seen associating with other dolphins in a non-aggressive manner. In New Zealand they are known to form long term associations with bottlenose dolphins8.

Like Killer whales and sperm whales, there is evidence that false killer whales form stable family and social groups4,9,10.  False killer whales studied in Hawaii remained around the island chain for a minimum of 20 years and stable associations between individuals were confirmed to last at least 15 years10.   Both males and females are thought to be able to start reproducing at between 8 and 14 years of age11, and individuals may live as long as 60 years or more.  Unusual for marine mammals, females that no longer produce calves continue to play a role in family groups, possibly looking after the young of other females in the group12.  False killer whales produce calves only once every 6-7 years, an indication of the maternal investment required to raise their young. Also unusual, false killer whales conduct prey-sharing, a behaviour thought to reinforce social bonds9. 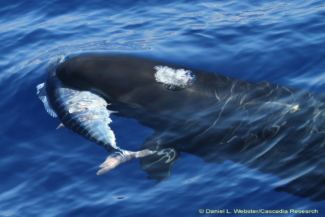 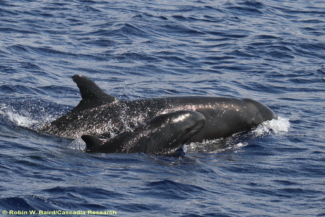 False killer whales are often viewed as a nuisance or as competitors by fishermen, particularly when they steal target fish from longlines, which they are known to do in Japan, Hawaii, the Indian Ocean and the Gulf of Mexico 1,2.   This has led to direct hunts or kills in some fisheries, including in Japan, St. Vincent and Taiwan.  The species is also prone to unintentional entanglement or injury in fisheries gear, which is thought to be unsustainable in the false killer whale population around the Hawaiian islands6. Bycatch in other fishing gear such as drift nets and purse seines also occurs, and pollutants, as well as depletion of their large predatory fish prey are thought to present threats to false killer whales around the globe2,16.

Due to their predominantly offshore distribution false killer whales are difficult to study and not many populations have been assessed.  As such, the species is designated as Data Deficient on the IUCN Red List of Threatened Species2.  The species is not listed on either Appendix of the Convention on Migratory Species (CMS).  There is serious concern, about the false killer whale population around the main Hawaiian islands, which was thought to number between 150 and 200 individuals in 2012, demonstrating a decline since 1989 10,17.  As such, this population is designated as Endangered under the US Endangered Species Act.

False killer whales are not frequently the prime, or sole target of whale watching activities, but they are often encountered on whale watching tours off Oahu, and less often off Maui/Lanai and Hawaii Island in the USA.  They can be highly entertaining to watch, as they often leap and can be observed feeding on large game fish. They can also be curious and sometimes approach vessels to bowride1. 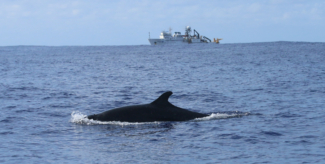 False killer whale with research vessel in the background. The distinctive nicks and scars on the trailing edge of this dorsal fin would allow researchers to identify this individual whale if it is photographed again. Photo courtesy of Paula Olson/PIFSC/NOAA. 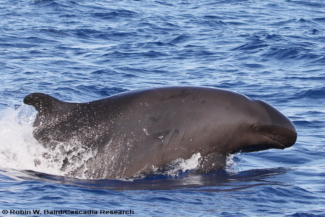