Chile’s extensive Pacific coastline, stretching over 4,000km and featuring some truly remote and unspoiled scenery, provides a spectacular backdrop to whale and dolphin watching. The Humboldt Current Marine Ecosystem, which causes upwelling of cold, nutrient-rich water, provides the basis for a rich and diverse array of whale and dolphin species from the country’s northern border down to Chilean Patagonia. The coastline from Patagonia down toward Chiles’s sub-polar southern tip is characterised by a network of islands, fjords and channels fed by freshwater flowing from the Andes. These rich and diverse habitats allow Chile to host nearly 40% of the world’s whale and dolphin species in its waters. A number of baleen whale species can be observed close to shore as they migrate between warmer breeding grounds to the north and rich Antarctic feeding grounds. The country’s waters also host resident populations of dolphins, including Peale’s and Commerson’s dolphins, bottlenose dolphins, Burmeister’s porpoises and endemic Chilean dolphins. Commercial whale watching was launched in the 1990s and has become increasingly popular over time1.

Trips leaving from La Serena or Chañaral de Aceituno, on the Atacama desert coast, often combine desert wildlife viewing with penguin, whale and dolphin watching trips. Boat trips leaving from Punta Choros visit the Damas and Choros Islands, while those leaving from Chañaral de Aceituno visit Chañaral Island. Here it is possible to see fin whales and bottlenose dolphins almost year-round, while Risso’s dolphins and humpback and blue whales are more likely to be encountered between December and March.

Another well-known whale watching area is the Chiloé Archipelago. The islands in the archipelago provide some good opportunities for shore-based whale watching, with boat-based trips around Puñihuil, as well as Melinka Island, where the Gulf of Corcovado provides some of the best opportunities to observe blue whales anywhere in the world.

Further south, day trips leaving from Punta Arenas can take tourists into the Francisco Colaone Marine Park to see a number of dolphin species, as well as humpback whales, in the area’s vast network of channels and fjords. Punta Arenas, near the southern tip of Chile, is also the launching point for many live-aboard cruises into the Magellan Straits and to the Antarctic, where a number of whale species can be observed on their feeding grounds during the Austral summer (see the case study on the Antarctic for more details). 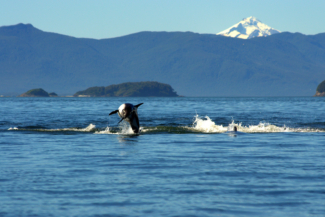 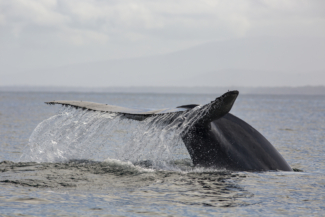 Additional information about whale watching opportunities in Chile can be found on the following website:

Chile’s national whale watching regulations were established in 2011 by the Tourism Division of the Ministry of Economy. The regulations stipulate some of the following points:

These regulations are explained in an illustrated best practice manual produced jointly by WWF Chile and the Blue Whale Centre (Centro Ballena Azul). This manual is available in Spanish here. 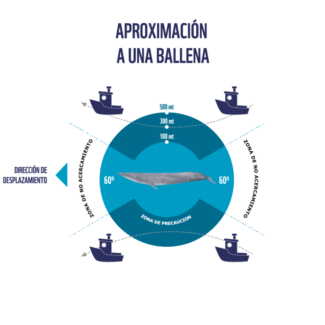 Research on Whale Watching in Chile

Research on whale watching in Chile has been limited to date. In 2007, research conducted from a land-based station used a theodolite to track common bottlenose dolphin movement and behaviour in the presence of whale watching vessels for comparison to their behaviour when no vessels were present. The study determined that dolphins were more likely to engage in higher energy behaviours (e.g. jumping, fast-swimming) in the presence of boats, and that this might ultimately have a negative impact on their energy budgets and long-term fitness. This effect was strongest when multiple boats were present, and when vessels stayed with the dolphins for extended periods2. Another study conducted in Yaldad Bay, southern Chile, also determined that boat presence correlated with faster swimming speeds in a population of Chilean dolphins3.

A 2010 review of tourism opportunities in the  Chiloé coastal region concluded that the area, and the Gulf of Corcovado in particular, had incredible potential for further development as a world-class whale watching destination. However, the review recognised that most whale watching offered at the time was run by local (fishing) communities, which was good for local income and community development, but also required further investment and development to attain international standards of sustainability, safety and comfort/service4. The review recommends conducting market-based research to ensure that the industry is able to attract clientele, and that the development of the industry is carefully managed using science to inform adaptive management and ensure that target whale and dolphin populations are not negatively affected4. 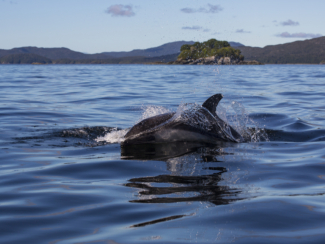