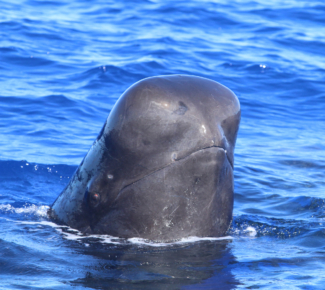 Short finned pilot whale. Note the bulbous head after which the species is named. Photo courtesy of Paula Olson.

Short-finned and long-finned pilot whales are almost impossible to distinguish from each other at sea in the few places where their ranges overlap (South Pacific, North Atlantic; off the coast of South Africa; and off of southern Brazil, Uruguay and N. Argentina).  Although the two species’ flippers differ in length and shape, these differences are difficult to observe at sea, and differences in skull shapes are one of the only certain ways to distinguish one species from another where they overlap2,3.  Pilot whales can also be confused with other ‘blackfish’, including false killer whales, pygmy killer whales or melon-headed whales, but none of these species has the bulbous head or rounded hooked dorsal fin that is characteristic of adult pilot whales. These other species’ dorsal fins and flippers are also located further back on their bodies than those of pilot whales.

Short-finned pilot whales have a mostly tropical and warm-temperate distribution which includes both nearshore and open-ocean waters. Long-finned pilot whales, on the other hand, are found in cool-temperate and sub-polar waters of the Southern Hemisphere but only the North Atlantic and Mediterranean in the Northern Hemisphere. Long-finned pilot whales were previously found in the western North Pacific as well, but appear to be absent there today4.   Pilot whales are generally nomadic, but a few resident populations have been identified and studied in different locations.  They are apparently attracted to areas with varied depth contours that can be linked with high productivity.2 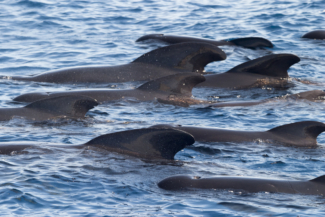 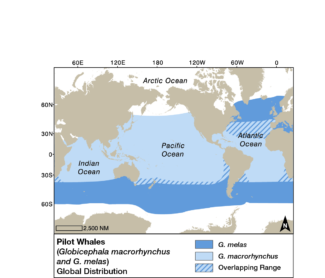 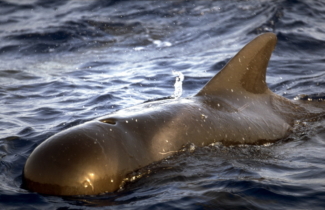 Both short-finned pilot and long-finned pilot whales feed primarily on squid, but long-finned pilot whales also frequently take various species of medium-sized fish and even shrimp.  Like many other whales and dolphins that specialize in squid, they have very few teeth5.  It is believed that they rely more on suction to capture and ingest their prey than chasing and clamping/biting as is common among other toothed whales and dolphins that prey on fish6. In 1982-83 a strong El Nino event caused major ecosystem changes off the coast of California near the Channel Islands where a fairly stable population of short-finned pilot whales had consistently been studied, and the pilot whales disappeared from the area for several years. This was presumably due to a shift in the spawning grounds for their preferred squid prey. It was many years before the population returned to the area.2

Like Killer whales and sperm whales, pilot whales form stable family and social groups of 20-100 individuals. These groups are based on matrilineal lines – meaning that calves stay with their mothers through adulthood.  Unlike sperm whales, young male pilot whales do not leave their maternal group to seek mating opportunities, but instead stay with their maternal group for life.  It is thought that males gain the opportunity to mate with females outside their own family groups when multiple pilot whale groups come together in large aggregations2,7.

Female pilot whales reach sexual maturity at the age of 8-9 years, while males are a bit later at 12-17 years. Gestation is estimated to be 12 months for long-finned pilot whales and 15-16 months for short-finned pilot whales.  Calves nurse for at least three years, and perhaps even longer, even after they have started eating a solid diet. Females tend to reproduce up to the age of 40, but can continue nursing and caring for other females’ calves for up to 15 or 20 years after they stop producing calves themselves2.  Males have shorter life-spans, usually living only 35-45 years2. 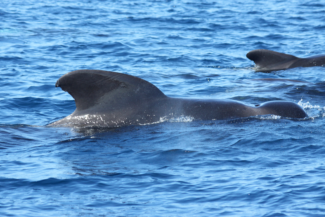 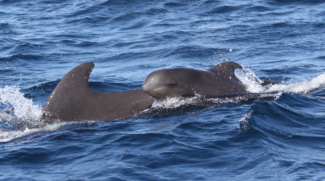 Resident populations of pilot whales, such as those off the Canary Islands, Madeira, and Hawaii can be studied using photo-identification. Individual pilot whales are photographed and recognized over time by the unique nicks and scars on their dorsal fins, allowing researchers to monitor individual’s movements and life histories over time. Scientists also use a host of other research techniques including satellite tagging, acoustics, and genetics to study this species and learn about their long-range movements, population identity and communication.

There is no documentation of predators taking pilot whales, although it is likely that killer whales or large sharks target the species from time to time8. Pilot whales are the species most often involved in mass strandings throughout their range, with several well-documented incidents that have given rise to various theories about the cause of mass strandings. These theories include accidents in navigation that lead animals to unexpectedly shallow waters9, anomalies in the earth’s geomagnetic fields caused by solar storms10, or impaired navigation in diseased individuals that lead the rest of the group astray. The latter theory was discredited to a certain extent by genetic analysis of stranded pilot whales that showed that whales that stranded together were not often closely related11.

As top predators, pilot whales also suffer from the bioaccumulation of contaminants such as heavy metals and organichlorines contaminants in their tissues3,14, which can may have serious long-term impacts on health and reproduction.

Pilot whales’ strong social bonds and herding instincts make them prime candidates for so-called drive fisheries, where they are herded towards shore by many boats and then killed in shallow waters. Long-finned pilot whales used to be hunted this way in Newfoundland (Canada), Cape Cod (USA) Norway, Iceland, Greenland, Ireland, Scotland and the Falkland Islands.  Currently the only remaining active pilot whale drive fishery is in the Faroe Islands, although a hunt continues in Greenland as well4,15. 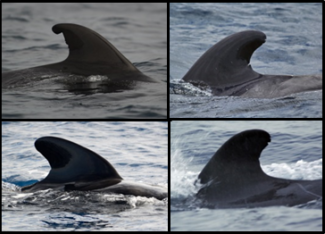 Short-finned pilot whales in the Canary Islands can be recognized by the nicks and scars on their dorsal fins. Photos courtesy of Fabian Ritter/MEEReV. 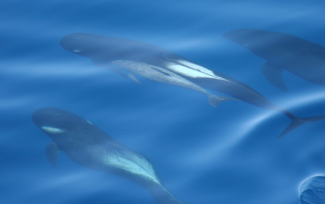 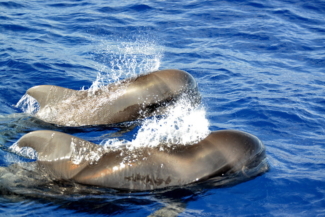 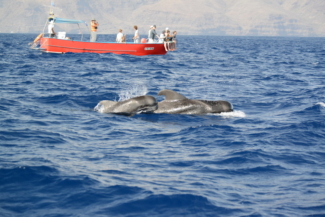