Thirty-five species of cetaceans have been recorded off the coast of Argentina, where whale watching began informally in 1973 when Mariano van Gelderen took his small boat out to watch the amazing southern right whales (Eubalaena australis) in Península Valdés. Mariano was nicknamed “El rey de las ballenas” (the whale king) recognizing his role as a pioneer of what is now one of Argentina’s most important tourism activities1. Shortly afterward, world renowned whale researcher Roger Payne and the photographers and film makers Des and Jen Bartlett, brought worldwide publicity to whale watching at Puerto Pirámides, Península Valdés when their work was featured in National Geographic Magazine and television documentaries the 1970s.

Commercial whale watching tours officially commenced in 1983, and expanded from Península Valdés to other areas in the 1990’s. Whale watching is still expanding into new areas and focusing on new species such as Commerson’s dolphins in the province of Santa Cruz. As of 2018, at least ten communities in four different coastal provinces benefit from land-based or boat-based whale watching.

The industry still focuses on Southern right whales between June and December, but also offers other opportunities, including the spectacle of killer whales hunting southern sea lions and southern elephant seals at Punta Norte and Caleta Valdés, or observing the rare Franciscana at the Río Negro Estuary.

Between May and December the Península Valdés serves as an important calving and nursing ground for southern right whales. Boat-based whale watching trips depart daily from the idyllic town of Puerto Pirámides.  However whales can be also viewed from land at Playa El Doradillo, Puerto Madryn and all along the coast of Península Valdés. Between August and October, as right whales prepare to migrate back to their southern feeding grounds, they can be observed during boat tours in the Bahía de San Antonio Nature Reserve or from land in Mar del Plata, Miramar and Necochea.

Commerson’s dolphins are sighted year-round in all of the areas listed on the table below.  Peak sightings of this species occur between April and November at Playa Unión and between September and April in Bahía Camarones, Ría Deseado and Bahía San Julián. The species can also be observed from land along the coast of Patagonia (e.g. Bahía Camarones, Ría Deseado, Bahía San Julián, Puerto Santa Cruz, Cabo Vírgenes).

In Tierra del Fuego, boat-based nature trips are run from Ushuaia to observe birds, southern sea lions and the landscapes of the Beagle Channel. Sightings of cetaceans during these trips are sporadic (usually only during the Southern Hemisphere summer) and can include minke, sei, humpback, and killer whales, as well as dusky dolphins, long-finned pilot whales and southern right whale dolphins. 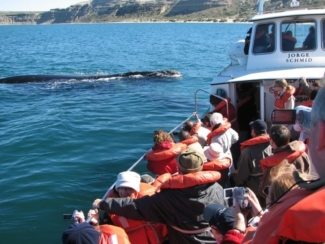 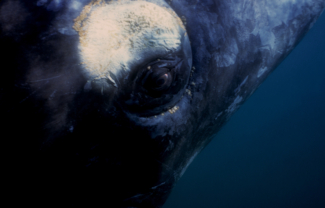 Additional information about whale watching opportunities in Argentina can be found on the following websites:

Whale watching in Argentina is regulated by two sets of legal frameworks that were developed in the two provinces where the activity is concentrated, Chubut and Rio Negro.

In 2005 the government of Chubut initiated a participative process including whale watching companies, non-governmental organizations and local authorities, in order to adapt the existing whale watching regulations. As a result of this process, Law N° 5714 was approved in March 2008. This Law and its correspondent Decrees 42/08 and 167/08 include the following provisions:

A summary of the  Chubut whale watching regulations in English can be downloaded here.

The province of Chubut has also issued regulations for dolphin-watching activities.  These regulations are largely based on the recommendations that followed research on the impacts of dolphin watching on dusky and Commerson’s dolphins2,3 (see more details below). In the case of dusky dolphins in Golfo Nuevo, permits are issued under the Disposition N004/10-SsTyAP, that regulates boat-based wildlife watching, and describes the “Golfo Nuevo dolphin watching technique”. Stipulations of the regulations include:

The Southern right whale was declared ‘Natural Monument’ by the provincial law 4066 (passed on 6 April 2006) which promotes and regulates the sustainable use of the species. It also forbids vessels from approaching and/or harassing southern right whales and establishes the Servicio Provincial de Areas Protegidas (Provincial Protected Areas Service) as the authority to regulate whale watching applications and permits in the region. Private boats are prohibited, with the exception of authorized whale watching boats. The Rio Negro provincial authorities have authorized one operator to conduct in-water encounters with whales under careful monitoring and regulation by the province. Permits are issued on yearly basis. A summary of the Río Negro whale watching regulations in English can be downloaded here. 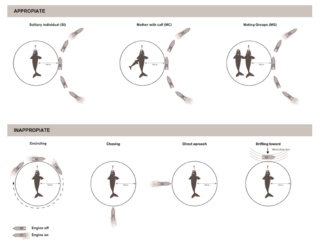 Research on whale watching in Argentina

A 2017 study reviewed the fluctuations in the number of passengers, the biological changes and the socio-economic factors that influenced the development of whale watching activities in Peninsula Valdes. The authors identified four stages in the development of the industry, which have culminated in a successful industry that is well regulated through stakeholder collaboration. This progression is detailed in the case study of whale watching in the Chubut province featured in this handbook.

The industry is based on adaptive management, and takes into consideration the results of research, such as the study conducted by Argüelles et al.4, that evaluated the impact of whale watching on the behaviour of southern right whales in Península Valdés. Results showed that vessel approaches respecting the Patagonian guidelines (i.e. with the engines off), resulted in closer interactions with whales than close approaches with engines running, which often elicited avoidance behaviour4, supporting current guidelines and regulations.

Fazio et al. 5 described right whale group composition at different times during the whale watching season in Puerto Pirámides over six reproductive  seasons.  They determined that, during the first half of the whale season, whales were observed close to shore, and groups of whales sighted included solitary animals, mating groups and mothers with their new-born calves. In the second half of the season, whale watching trips ranged further to find the whales, which consisted mainly of mother-calf pairs, the last category of whales to leave the area5 for southern feeding grounds.

Adaptive management is also applied to dolphin watching.  A 2003 study2 described the development and the impact of dolphin watching on Commerson’s and dusky dolphins in Chubut, determining that dusky dolphins’ feeding behaviour was likely to be impacted by vessel presence while Commerson’s dolphins performed aerial displays in the presence of dolphin watching vessels that are otherwise rarely seen. The direct gross estimated income for the companies carrying out dolphin watching was around US$60,000 per year2.  The authors’ recommendations that the activity be better managed to minimize impact led to the development of formal regulations for both species.

Two studies examined the potential impact of dolphin watching activities on dusky dolphins in the Chubut province, and determined that vessel presence was likely to distract the dolphins from feeding behaviour6, and/or prevent them from transitioning from travelling to feeding behaviour3.  These distractions could have serious long-term impacts on the well-being of the population if they result in regular and repeated loss of feeding opportunities, and should be taken into account in management measures to minimize the impact3,6.

Researchers are conducting a feasibility study to develop commercial whale watching in Miramar, where the occurrence of right whales between May and October has attracted the attention of the local community as a potential resource for tourism-related activities. Two years of systematic land-based observations suggest that the seasonal abundance of right whales peaks in August and September in this area7.

A 2012 study assessed right whales’ behavioural response to the presence of whale watching vessels in Bahía San Antonio8. Whale behaviour was altered by vessel approaches, highlighting the need for effective conservation measures and mitigation of behavioural impacts in relation to whale-based tourism8.  A second study in the same location in 2018 showed that changes in behaviour were dependent on the approach distance, the group composition of the whales, the vessel’s adherence to approach guidelines, and whether or not engines were running9. Whales were more evasive when approached closely with engines on, while conversely, whales tended to approach vessels more closely if the vessels drifted towards them with engines off. Solitary individuals were more likely to interact with vessels, while breeding groups tended to remain neutral. The results of this study may have significant implications for whale watching regulations and their enforcement9.

In 2013 researchers conducted a study on the feasibility of developing dolphin watching activities with Franciscana and Bottlenose dolphins at the Río Negro Estuary10.  The study concluded that bottlenose dolphins can be observed all year round and Franciscana from March to July, but that only land-based dolphin watching should be conducted in order to reduce the impact on these species10.

Failla et al.11 evaluated the potential effects of vessel traffic on Commerson`s dolphins in Bahia San Julián. Unlike most studies of this nature, the authors found that dolphin watching vessel presence was not correlated with significant differences in behaviour, regardless of the number of vessels nor in the power of the engines or the type of activity performed by the vessels11.