South Africa is one of the best destinations worldwide for watching whales and dolphins.  Annual visits from southern right and humpback whales and the presence of enormous pods of dolphins all year-round provide amazing viewing opportunities both from land and from boats.  Boat-Based Whale and Dolphin Watching started in the early 1980s and the government responded to the need to officially regulate and manage this industry in 1999. The sector has grown from ad hoc activity to regulated commercial operations across 28 designated areas, which stretch along the coastline and sheltered bays from Port Nolloth on the west coast to Sodwana Bay in the North East.

Although at least 37 species of whales and dolphins can be found in the waters of South Africa, whale watching has traditionally focused on the migratory routes of spectacular species such as humpback and southern right whales.

Every year between June and December, southern right and humpback whales can be seen along the south coast from Cape Town to Mossel Bay.  During this period, both species are frequently seen with calves, as they use South African waters for calving and rearing their young.  The whales’ annual visits are so predictable, and whales often so close to shore, that that south coast is also known as the ‘whale route’ and a whale festival is held every year at Hermanus.

In Knysna and Plettenberg Bay cetaceans can be sighted all year round with most sightings being those of Bryde’s whales and dolphins. These areas also offer a spectacular scenery of the Tsitsikamma and Robberg nature reserves.

Currently there is limited information on whale watching in the east coast from Port Elizabeth to Sodwana Bay. However, Port Elizabeth in the Eastern Cape Province is known as the Bottlenose Dolphin Capital of the World. Although the largest bay of the country, Port Elizabeth sees minimal sightings of the southern right, humpback and Bryde's whales. Nonetheless, a number of humpback whales are mostly encountered along the east coast during the sardine run, a synchronized migration of sardines towards the warmer current of Mozambique. The sardine run creates a feeding spectacular for seabirds, whales, dolphins and sharks. The season for whale watching along the east coast is expected to be between June and December, with humpback whales being the stars of the seasons.

For more information about whale watching in South Africa 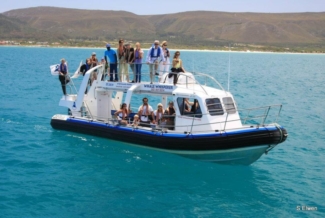 Since 1999, whales and dolphins have enjoyed the protection from fishing pressures with permits for non-extractive use managed under the terms of the Marine Living Resources Act, 1998 (Marine Living Resources Amendment Act 68 of 2000 – Gazette No. 21844, Notice No. 1315. Commencement 30 May 2000). These species continue to benefit from national protection where long-term whale watching operators’ permits are administered under the terms of the National Environmental Management Biodiversity Act, 2004 (Act No. 10 of 2004): Threatened or Protected Marine Species Regulations Government Gazette 40876 of 30 May 2017. Protection of these species is further enhanced through strict policy requirements for whale watching vessels (Maritime Notice 11 of 2008). Thus, the South African government is empowered by strong and progressive legislation to support and address biodiversity compliance programmes on ecosystems and natural resources.

As the issuing authority for environmental management and conservation activities, the National Department of Environmental Affairs issues operating boat-based whale and dolphin permits for a period not exceeding 10 years. Permits are renewed annually subject to adherence to permit conditions and the established code of conduct.  This code includes approach protocols that stipulate minimum distances and maximum speeds. Under the regulations, non-permitted persons and/or vessels are prohibited from approaching whales at a distance of less than 300m.  The legislation further prohibits non-permitted persons to advertise or offer whale watching services. It is through these statutory provisions that the Department pursues a long-term sustainable utilization approach of the marine biodiversity for the benefit of South Africans and the global community.

Limited research on whale watching in South Africa is available. What has been conducted has focused on the socio-economic perspective of this activity in the country. This includes a study commissioned by the former Department of Environmental Affairs and Tourism (now Department of Environmental Affairs), to characterize and evaluate the whale watching sector in order to identify opportunities that may allow for maximization of current number of permits without putting pressure on the resource2. The Department further commissioned a review study to assess the performance of boat-based whale and dolphin watching operators between permitting period 2005 and 2015 in aspects of transformation, utilization of permits and corporate social responsibilities in the area of operation. This study is however not finalized.

The natural science aspects of research on whale watching have also been very minimal. As part of their permit conditions over the past several years, permitted operators have been providing the Department with photographs and data on the number, size,  and sex of observed whales,. Most of these operators however undertake independent research to support their operations and students pursuing interests in marine ecotourism and/or marine ecosystem management.

This document was developed based on monitoring data submitted by permitted whale watching operators from Cape Town to Sodwana Bay. Special thanks to Hermanus Whale Cruises and Advantage Cruiser for their extended efforts of contributing to drafting this document.