Whale and dolphin watching can be enjoyed in three different areas under Portuguese jurisdiction. These include the waters off the Portuguese mainland, and the offshore islands of the Madeira and Azores archipelagos.  Whale watching opportunities off the mainland focus mainly on bottlenose dolphins, although other species are also observed.  The Azores are currently one of the world’s largest cetacean hotspots. More than 25 different cetacean species have been reported in the Azores waters, and the archipelago is one of only a few locations in the world where sperm whales can be reliably viewed year-round.   Madeira also hosts resident populations of short-finned pilot whales and bottlenose dolphins that can be observed year-round, and provides opportunities to see other rare, deep-diving species like beaked whales.

The presence of a resident population of bottlenose dolphins in the Sado estuary (ca. 40 Km south of Lisbon) triggered the development of a flourishing year-round dolphin watching activity in the area. In recent years this activity extended into the southern Algarve region where bottlenose and common dolphins are most regularly observed, but striped and Risso´s dolphins, minke and fin whales, can also be seen. Killer whales are regular visitors in the summer when migrating towards the Mediterranean to feed on tuna around the Gibraltar Strait. Other species that can be seen along the Portuguese mainland coast include the harbour porpoise, and the pilot whale and less frequent the humpback whale.  Some other harbours located on the most wind- exposed west coast (ex.: Cascais, Nazaré and Peniche) also offer dolphin watching excursions.  While in most locations, bottlenose dolphins can be seen all year round, the peak for dolphin watching activity is reached during the summer months, mainly from June to September. 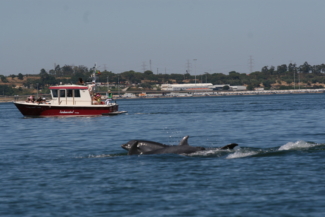 Dolphin watching vessel off the coast of Portugal. Photo courtesy of ICNF/RNES. 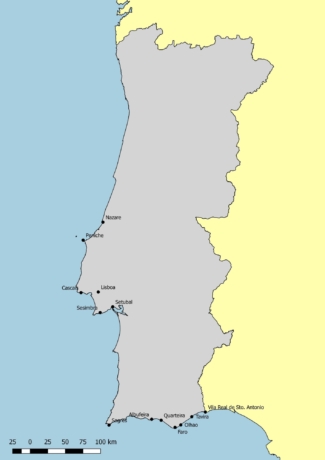 The Azores are famous for the opportunities they provide to observe sperm whales, which are resident year-round, although during the summer months they are more abundant and there is a higher chance of seeing them.  Between April and June, fin, blue and sei whales migrate through the Azores. Occasionally minke whales and humpback whales can also be sighted, although they are not as common as the other 3 baleen whale species. The summer is also the best season to see (and swim with) dolphins (common, bottlenose and Risso's), as during this time of the year there are more dolphin species in the area and large groups with calves are present.

More information about whale watching in the Azores: 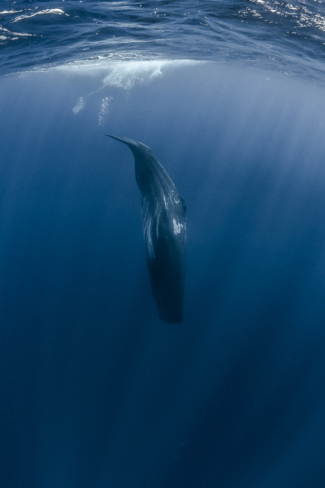 Whale and dolphin watching is possible in Madeira year-round, thanks to resident cetacean populations and good sea conditions. However, the best season for whale-watching tends to be from spring to autumn. Bottlenose dolphins and short-finned pilot whales are resident and sperm whales and striped dolphins are spotted regularly throughout the year.  However, common dolphins are mostly seen in winter and spring, and Atlantic spotted dolphins and Bryde’s whales are observed from spring to autumn.  Cetaceans such as the Cuvier’s beaked whale and the Blainville beaked whale also have a regular presence in these waters, although their shy behaviour makes them harder to spot. Species like the fin whale and sei whales can also be seen, with the former observed mainly in winter and spring, and the latter during summertime. More rarely other species, like the blue whale, the humpback whale, minke whales, Risso’s dolphins, killer whales, false killer whales, and more tropical species like the rough-toothed dolphin are also observed.

Madeira Island’s high cliffs allow whale-watching companies to have spotters, called “vigias”, stationed at high vantage points to search for cetaceans and guide the whale watching boats to the animals, very much like the “vigias” did in Madeira in the mid 19th century when whaling was conducted. It helps increase the already high cetacean sighting rates by the whale watching operators. 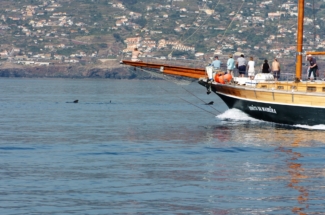 For more information about whale watching in Madeira: 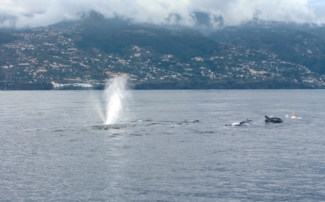 Whale surfacing next to dolphins off the coast of Madeira. Photo courtesy of Ana Dinis, Museu da Baleia da Madeira.

All cetaceans species occurring in mainland Portugal are protect by national legislation (Decree-Law nr 263/1981 from 3 September) and also by European regulations (Habitats Directive) and international conventions and agreements (Bern, Bonn, CITES, ACCOBAMS). Whale watching legislation aiming at regulating the activity in mainland Portugal was published in January 2006 (Decree-Law nr. 9/2006 from 6 January). It establishes a licensing scheme and a code of conduct for whale watching activities that must be followed by all boats (both whale watching companies and recreational boats) in the vicinity of cetaceans. The legislation prohibits swimming with cetaceans and stipulates minimum distances and maximum obsrvation times to be respected when aproaching and observing cetaceans. More details are provided here.

The Azores whale watching practices and rules seek a balance between supporting economic activities involving the cetaceans (whale watching) and the animals’ welfare and conservation. Whale watching activities are subject to strict regulation that includes a mandatory code of conduct and restricted number of licensed vessels. The licensing process and the limits on the number of operators per area help to promote the quality of the tourists’ experience.

Whale watching in the Azores is regulated by the following specific legislation:

Swimming with whales is forbidden in the Azores, for security reasons and to protect the welfare of the cetaceans. Exceptional authorizations are issued for professional audio-visual work with cetaceans in the water.  Swimming with dolphins is permitted, but regulated.  A new amendment to the diploma of cetacean observation is currently underway in order to amend and reinforce the current law, based on a dynamic management perspective. Some of the changes to the present legislation include: changes on the licensing process and improvement of the swimming with dolphins regulation.  More details on regulations in the Azores can be found here.

Madeira regulations are also governed by the desire to find a balance between the conservation of marine life and the marine ecosystem and the quality of touristic activities at sea. Regional Legislative Decree nr. 15/2013/M of 14 May established the regulation of marine vertebrate’s observation in Madeira archipelago, including cetaceans, sea turtles, monk seals and sea birds. The maximum limits of whale watching boats operating from local harbours is defined through the Ordinance nr. 46/2014 of 22 April, amended by Ordinance nr. 13/2015 of 14 January.

Regulations include a licensing system and limit on the number of boats operating in the archipelago. For the welfare of the animals and the safety of tourists, free swimming with cetaceans is not allowed in Madeira. However, common dolphins and spotted dolphins may by observed underwater as long as swimmers stay connected to the boat by a rope. Other rules include minimum approach distances (50m), a maximum time with the animals per boat (10 min), and, if several boats are present with the same group of cetaceans – they must all leave after a maximum of 40 minutes.  After this period the group should not be approached for 2 hours. Each boat is also limited to a maximum of 3 trips per day.

Whale watching in Madeira follows adaptive management, and it is expected that the number of licenses may be reviewed at regular intervals in order to reflect the scientific knowledge about the abundance, distribution and impact of the activity in the animals.  It also uses time area closures to protect animals – including the establishment of a whale watching exclusion zone at East/North East of Madeira Island after scientific studies identified this area as an important area of calving, feeding, resting and socializing for the main cetacean species present in the archipelago.

In 2016 the Madeira Regional Government approved (Resolution nr. 699/2016), which proposed a 6,820 km2 Special Area of Conservation (SAC) for cetaceans encompassing the coastal waters of Madeira archipelago. The whale-watching activities and regulations will be integrated in the SAC management plan. Regular scientific monitoring of the cetacean populations and of the impacts of human activities is expected to inform managers and prompt measures to minimize those impacts and contribute to the conservation, sustainable and respectful use of cetaceans and the marine environment. 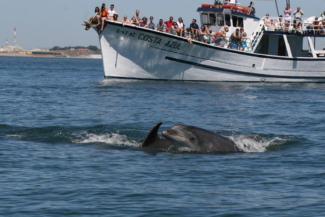 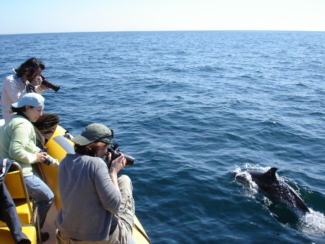 Dolphin watchers off of mainland Portugal. Photo courtesy of ICNF/RNES. 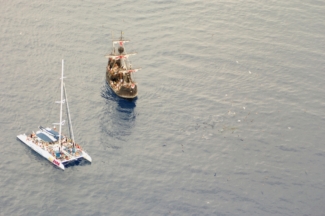 Research on whale watching in Portugal

A study of the acoustic behaviour of bottlenose dolphins in the Sado estuary, mainland Portugal, found that they were likely to alter their vocalizations in the presence of vessel traffic7.

All of these studies have been used to inform management and adapt regulations accordingly. 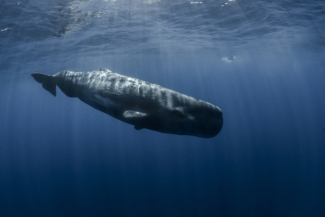