The Gulf of California is an important winter/calving and feeding area for Northeastern Pacific blue whales that feed off of the west coast of California in summer months.  Of the roughly 3,000 whales in the northeast Pacific population1, approximately 300 are estimated to spend their winters in the Gulf of California2.  Photo Identification studies have shown that blue whales remain in the Gulf of California for up to 70 days, and that nursing mothers and their calves show a particular preference for the coastal waters of the National Park of Loreto Bay (NPLB) 2. From 1996 onward, these blue whales became the focus of marine tourism and whale watching activities, and by 2009 roughly 50 small boats were operating in the marine park. There were indications that proposed coastal developments, marine traffic and whale-watching activities would significantly increase in the coming years.

Concerned that the level of vessel traffic and uncontrolled whale watching behaviour would have a negative impact on the whales (particularly the mothers and calves that needed time to rest, nurse and feed before undertaking the long migration back to northern feeding grounds) Dr. Diane Gendron and her research team decided to implement a study on the impacts of whale watching.  By this time the team had built up a photo-identification catalogue of 750 individual blue whales3 and collaborated with the National Commission of Protected Areas (CONANP) in the design of Mexico’s Blue Whale Program of Action for Species Conservation (PACE).

In the months of February-April every year from 2009-2016, the team used a 7 m long skiff with an outboard engine to conduct continuous individual focal sampling3 adapted to blue whales. They continually recorded whales’ swimming tracks and surfacing and diving behaviour, in order to compare how these varied in the presence of whale-watching boats versus when no whale-watching boats were present.  To minimize their own disturbance to the whales, the research team followed at a distance of more than 100 m (range: 100-800m) and shut down their engines as frequently as they could while still keeping sight of the whales.  Over the years, they conducted follows on a total of 148 individuals (66 females, 20 females with calves, 38 males and 24 individuals of unknown sex) amassing a total of 646 hours of track and dive data (an average of five hours per day). 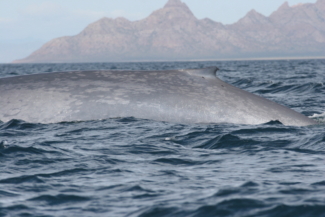 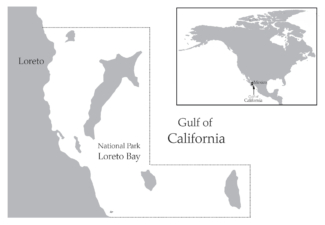 The research team, along with park managers and the whale watching community, engaged in a multi-stakeholder consultation process to improve and promote this new passive method and to design whale watching guidelines for blue whales in the NPLB.  These new guidelines would supplement the Mexican national whale watching guidelines that specify the approaches, distance and number of boats that can observe whales   (NOM-131-SEMARNAT-2010)5.  Multi stakeholder workshops included presentations on blue whale biology, ecology and research results as well as practice sessions in the field. The researchers explained in detail why the changes in the blue whales’ behaviour around whale watching boats were significant: if they resulted in the loss of important resting, feeding and nursing opportunities, the whales would be less fit and less prepared for their migration. This is especially true for calves that need to nurse and grow and gain weight before migrating north. The researchers also showed photographs of individual whales that all captains in the whale watching fleet recognized.   The researchers explained how these individual whales’ fidelity, which keeps them in Loreto Bay throughout the winter-spring season and sees them returning year after year, makes them more vulnerable to disturbance from whale watching.   This highlighted the importance of respecting the whales’ needs so they are not driven away from the area. During practice boat tours, whale watch captains were taken out at sea in two to three of their boats, in conjunction with a kayaker who pretended to be a blue whale. One by one, captains had to demonstrate how they approached the whale (kayak). While discussing their approaches, it became clear they knew what was not permitted in the Mexican regulation and how it could be improved using the new passive method.  The operators appeared to come to a consensus, and showed great appreciation for the opportunity to learn about the whales, their biology, and the new whale-watching method.  The researchers provided them with more information in the form of brochures and posters that they could use to better inform tourists about blue whales.

The meetings and workshops resulted in the formation of the Loreto Bay Blue Whale Conservation Group (GBAL), a network involving the whale watch tour operators and captains,

National Polytechnic Institute (CICIMAR-IPN) researchers, the NPLB authorities, and local NGO’s.  The newly formed network agreed to new guidelines for whale watching, with the operators agreeing among themselves to no longer approach mothers with calves, and forming their own self-regulatory body to watch each other and ensure the guidelines are followed.  The new whale watching guidelines were summarized and printed in a poster and leaflet format and displayed and distributed in places where tourists, as well as operators could learn about the guidelines and their importance. 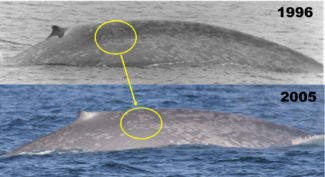 The researchers were able to show tour operators how they recognise individual whales and follow their progress over time. Photos courtesy of Diane Gendron. 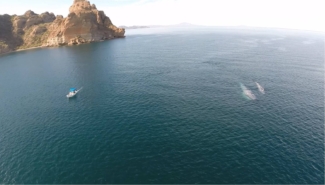 This short video: “Between giants: Whale and whale watching” demonstrates how, for many, the research team’s actions were louder than their words, as whale watch operators had seen the small research boat out on the water during their tours, and observed first-hand how their passive approach resulted in rewarding encounters with the whales.

As a first step, when a blue whale (blow or body) is sighted, the captain estimates the last position where the whale dived, slowly heads in that direction and turns off the motor. Meanwhile, they observe if there are other whales around and determine the behavior of the whale (e.g. travelling, circling at surface, surface feeding, etc.) and dive duration. In the case of sighting a female accompanied by its calf, the rule is not to follow them. Depending on the whale behavior observed, the captain may decide to slowly follow the whale’s heading, if it is travelling, but only start their motor when the whale has dived and then estimating the distance the whale will travel under water. They may stay with the motor off, if the whale is not moving far between dives. There may be more than one boat with the whale and, as long as all of them follow these simple rules, the method works very well. When they decide to leave the whale, they slowly leave the WW area before increasing speed to travel mode.

Be inspired: watch the video

Since 2014, the new guidelines have been working well, and tour operators are using them not only for blue whale watching –but also when they approach other species of whales, like humpback whales. The research team has continued to monitor the diving behaviour of whales in presence of WW boats during the 2014-2017 seasons, and have determined that there is no longer a decrease in dive and surface times in the presence of whale watching vessels as there had been in the past.  Tour operators, tourists, researchers and park managers are all positive about the new developments, which have been successful for the following reasons:

While on the whole, the passive whale watching has been an enormously positive development for the community, and most of the boat captains use it, there are still some who do not.  Their non-compliance can potentially jeopardize the positive tourism experience of others if their boats disturb the whales while the others are passively observing. But peer pressure within the tour operator community is acting as a positive force:  at their own suggestion, attendance to training workshops has become more or less mandatory for those who wish to be hired as a whale watch boat captain by the tour operators. This has increased the number of captains using passive approaches and also led vessel captains to watch each other on their approaches. 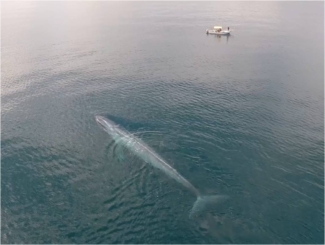