In 2002, citizen stakeholders, the United States National Oceanographic and Atmospheric Association (NOAA Fisheries), Canada’s Department of Fisheries and Oceans (DFO) and the Vancouver Aquarium joined forces to successfully rescue, rehabilitate and return an orphaned killer whale named Springer to her native wild pod in the Puget Sound.  The risky undertaking was more successful than almost anyone could have hoped for, with Springer successfully reunited with her native pod, and now producing healthy calves of her own.  The experience created a bond between the individuals and organisations that participated in the rescue, including citizen stakeholder Donna Sandstrom.

While Springer thrived, the Southern Resident Killer Whale population began a precipitous decline, to the extent that they were declared endangered in 2005. Alarmed at their plight, and inspired by Springer’s success, Donna Sandstrom left her career in software development to found a programme focused on building awareness about Southern Resident Killer whales and other marine mammals.

The programme’s inspiration came from Donna’s childhood in California, where a series of mission bells along Highway One connect travelers to the historical significance of the road.  What if a similar series of signs could educate people about killer whales, and where to watch them from shore?  In 2008, Sandstrom coordinated the first meeting to turn this concept into a reality, reuniting many partners from the Springer rescue, and inviting new partners to join in the effort to create the Whale Trail.  The founding partners included NOAA Fisheries, the Washington Department of Fish and Wildlife, People for Puget Sound, Seattle Aquarium, and the Whale Museum.  The partners agreed to focus on four main objectives:

They selected 16 inaugural sites, created a website, and set about designing and producing the first signs that would be installed at the shore-based whale watching sites they had selected.  The first signs were installed in 2010, along the Strait of Juan de Fuca. Over the next few years, signs were installed on every Washington State ferry, throughout the Salish Sea, and along the Pacific Coast. In 2014, through a partnership with National Marine Sanctuaries, West Coast Region, the project expanded to California, adding signs in Monterey, Santa Cruz and Point Reyes. In 2015 the team partnered with the BC Cetacean Sighting Network to add sites and signs throughout British Columbia, and with an Oregon team to add sites there.

The founding goal of The Whale Trail was to add sites and signs throughout Southern Resident Killer Whale range. As the project expanded beyond SRKW range, The Whale Trail has a new goal to extend from Baja to Alaska, along the gray whale migration route. There are now more than 90 Whale Trail sites, spanning the west coast from California to British Columbia. Through the current sites and signs, including 2 on every Washington State ferry, the project reaches more than 90 million people each year. 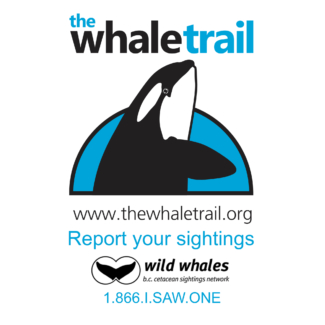 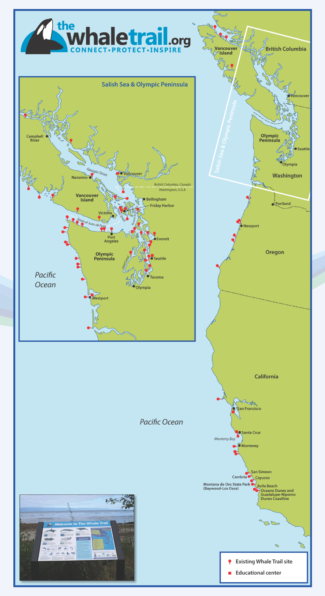 How does the Whale Trail work?

Whale Trail sites are located in city, state, county and national parks, and tribal lands. Each site has a page on the project’s website, and many feature interpretive signs.  Visitors can use the website to plan trips to shore-based whale watching sites, and learn about the marine mammals at that site from the information on the website or the interpretive panels.

When new regions are added, a local team is formed to ensure that the right stakeholders are involved, that interpretive panels are accurate in the information they provide, and well suited to the particular needs of that new community. Through this approach, in addition to the founding partners, the core teams now includes a multitude of stakeholders including national marine sanctuaries, the British Columbia (BC) Cetacean Sighting Network, state parks and agencies, and citizen groups in each of the regions where sites have been established.

The Whale Trail is recognised under US law as a 501(c)3 nonprofit organization, based in Seattle, and the project’s work is supported through grants and individual and corporate donations, as well as direct and in-kind contributions from the project’s partners.

In addition to the establishment of Whale Trail sites, the project engages in various outreach and education activities, including training of local residents to become ‘Orca Stewards’, educational activities for school children, and a lecture series featuring researchers, biologists, educators and artists.  The Whale Trail is creating a new platform for citizen science, and encourages the use of Whale Alert to report marine mammal sightings. Whale Alert is an app developed by a consortium including Point Blue, Conserve IO, NOAA Fisheries, National Marine Sanctuaries and the International fund for Animal Welfare. Data collected along The Whale Trail will contribute to research and understanding of marine mammal (seasonal) distribution as well as alert other users to active ‘hotspots’ where marine mammals are viewable from shore at any given time.

Learn more about the Whale Trail Story from this video. 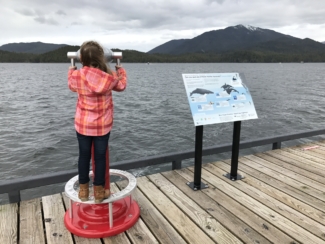 Lessons learned and visions for the future

The project’s success so far can be attributed to a number of strengths:

When reflecting on how the project could have been even more effective, Donna Sandstrom, project founder, wishes that she had started fund-raising earlier in the project’s development.  The project was made possible through the dedicated volunteer efforts of many individuals. Raising funds to create paid positions within the project organization at an earlier stage might have allowed the project to develop even more quickly and effectively.

Future aims for the project include:

For more information about the Whale Trail, please contact: 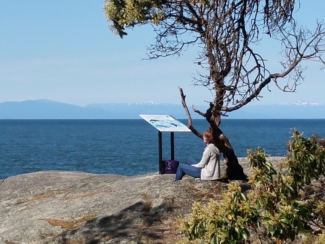 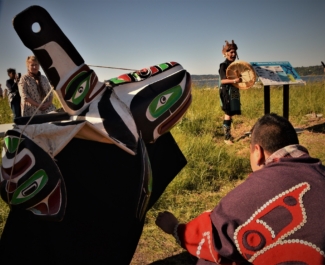 The whale trail has worked with local stakeholders in every location where a new viewing point is inaugurated, including local First Nations and Tribes. Photo courtesy of Donna Sandstrom