The Archipelago of Bocas del Toro hosts one of the most popular dolphin watching industries in Panama.  Located on the Caribbean coast of Panama, the area includes 9 main islands, and more than 200 smaller islets and mangroves covering an area of roughly 650 km².  The permanent population of the area is approximately 125,500, most of whom live on the main island of Isla Colon1.   During its colonial history, the Bocas del Toro region engaged in cash crop agriculture for bananas, sugar cane and cocoa, but the region’s main income-generating industry today is tourism.  Tourists from all over the world come to the area to enjoy its beaches, coral reefs and mangroves which host nesting turtles and are recognized as a RAMSAR site1.

Tourists are mostly international, with a significant proportion from the United States2, and arrive to the main city on the island of Colon by air on a Caribbean cruise ship3.  For many years local tourism companies have offered day-long boat trips through the mangroves and around the islands, including opportunities for tourists to snorkel on reefs and view tropical wildlife (birds, frogs, monkeys) in the mangrove forests1.  From roughly 2000 onward, these tours began to include an element of dolphin watching, focusing on a resident group of bottlenose dolphins reliably found in the heart of the mangrove islands in a semi-enclosed cove known as Dolphin Bay1,2,4.  Tours almost all start and finish at the same time, leaving the island of Colon at roughly 9:30 and returning in the mid-afternoon.  Tours are mostly conducted on open-decked fiberglass or wooden boats between 6 and 9 meters long using 75-90 horse power outboard engines and driven by local boat captains with a relatively low level of education and a high rate of turnover3. While most tours are offered by commercial operators, private residents and hotels with boats also conduct tours2.

Photo-identification studies have shown that dolphins in the area are genetically isolated from other Caribbean bottlenose dolphins5, and that there are two communities of dolphins using the Bocas Del Toro area, which collectively number fewer than 100 individuals6.  Of these, roughly half are wide spread throughout the region and show low levels of residency, while an estimated 37 individuals show high fidelity to Dolphin Bay, where they are frequently observed and recognized by the distinctive notches and scarring on their dorsal fins6.  The inner part of Dolphin Bay has also been shown to be most frequently used by mothers and calves, which have become a specific target of the dolphin watching industry6.

Between 2004 and 2013 there was a sharp increase in tourism in the Bocas del Toro area, and specifically an increase in dolphin watching activity4.  One study conducted during low season documented that during 42% of the time that dolphins were under observation,  3 to 15 boats were present around one group of dolphins3,7.  On one occasion during the ‘low season’ of 2012, as many as 40 vessels were observed around a single group of dolphins, and estimates are that this could rise to as many as 100 boats per day during the high season4.  The intense pressure on this small group of dolphins has been linked to a minimum of 9 dolphin deaths deemed to be caused by  vessel collisions or propeller injuries in 2012-2013 alone8.  Many other individuals in the small population bear scars indicative of interaction with vessels, as well as a variety of skin lesions and pathologies thought to be linked to stress8-10.

Studies focusing on the impact of dolphin watching vessels on dolphins’ behaviour have documented a change in vocalizations11,12 and a decrease in resting, socializing and feeding in the presence of boats, while traveling increased13,14.  These short term impacts which lead to higher energy expenditure and reduced feeding and resting are likely to translate into long-term impacts on the population’s health and fitness13,15,16. 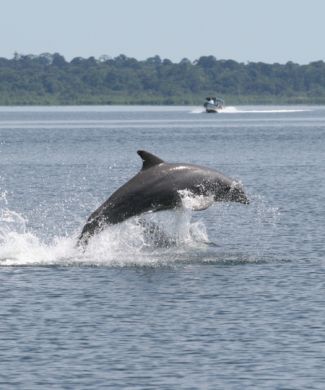 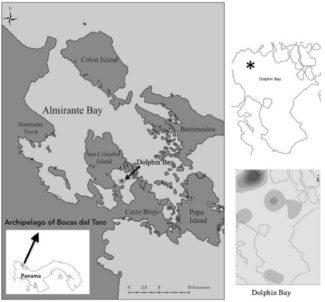 Dolphin watching vessels search in a pack for the bottlenose dolphin in Bocas del Toro. Photo courtesy of Ashley Sitar.

The Panamanian Government has enacted official regulations to manage whale-watching activities (via DM0530/2017, Republica de Panama Asamblea Nacional Legislacion de la Republica de Panama, 2007).  These regulations stipulate that boats should not approach dolphin closer than 100 m, and that no more than two vessels should be within 100 m of a group of dolphins at any one time.  However, there are no surveillance or enforcement measures in place in Bocas del Toro.

Boat drivers feel pressure to ensure that tourists see dolphins and that they get the perfect interaction and photo-opportunity, sometimes even allowing tourists to enter the water with the dolphins3.  This results in high levels of non-compliance with the legal regulations. One study found that boats were closer than 100m to dolphins during 71% of the time that observations were conducted and that more than 2 vessels were present with one group of dolphins during 45% of observation time7.  These findings, as well as observations of up to 40 vessels with one group of dolphins were made during the ‘low’ tourists season, and are likely to demonstrate even higher levels of non-compliance during high season4,7.

These same studies found that dolphins’ behaviour was less significantly altered when vessels complied with guidelines than when they did not3, providing some indication that the guidelines could be effective if they could be enforced and followed by all operators. 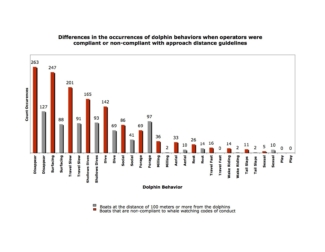 The extreme crowding and pressure caused by dolphin watching to a small, genetically isolated population of bottlenose dolphins has caused great concern among the international research community.  The issue has been the focus of discussions of the Scientific Committee of the International Whaling Commission17,18, and the Cetacean Specialist Group of the IUCN has sent letters of concern to the government of Panama.  To date, the situation has not yet significantly improved, but a number of lessons learned and new initiatives point toward future mitigation measures:

For more information on research and conservation efforts in Bocas del Toro see:

For updates and new research published since this case study was drafted in 2018 see: 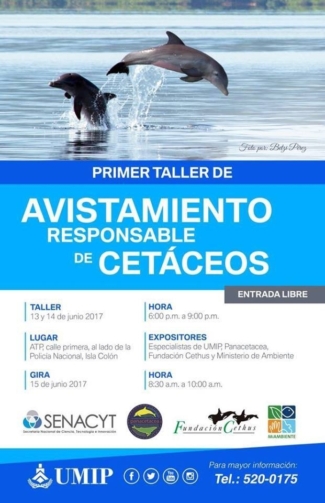