The Gulf of Maine has been a popular whale watching destination since 1975 when a fishing charter company (the Dolphin Fleet) first took passengers from Provincetown, Massachusetts to the whale feeding grounds on the Stellwagen Bank. This marked the inauguration of commercial whale watching on the U.S. East Coast. Today, whale watching in the sanctuary is among New England’s most notable recreational industries1,2.

Dedicated research on whales in the Gulf of Maine also started in the 1970’s.  The Center for Coastal Studies (CCS), also based in Provincetown, Massachusetts was one of the first organizations to begin researching whales in the Gulf of Maine. The Center’s whale research had its foundation in commercial whale watching, when CCS scientist, Dr. Charles “Stormy” Mayo, joined the first trips by the Dolphin Fleet.  CCS placed staff on the whale watching vessels to collect data for its research and to simultaneously serve as naturalist guides, enriching tourists’ experiences1.  Other groups followed suit, resulting in a rich partnership of research, education and industry throughout the region.  A data collection methodology was distributed in the 1980s, and a multi-decade community whale-naming process was established to ensure consistent and effective communication about individual whales.

Many NGOs and whale researchers in the Gulf of Maine have since depended on whale watching data to conduct their work over the past four decades, with some strong, collaborative relationships supporting whale research and conservation.  While many different methods are used by researchers to study whales, photo-identification of individual whales is one of the cornerstones that underpins many other aspects of research.  Individual humpback whales are recognizable over time by the unique colouration on the underside of their tail flukes as well as the serrations on the trailing edges of their flukes and permanent scarring and notches on their dorsal fins3.   The Gulf of Maine Humpback Whale Catalog contains photos documenting each time that an individual whale was encountered, accompanied by detailed information for each individual, including age, sex, relatedness to other whales, number of offspring, observed behavior, distribution of sighting locations and evidence for human impacts (e.g. scarring or entanglement events).  Today the catalog includes photographs of approximately 3,000 individuals seen at least once since the 1970s.  An estimated 25% of photographs in the catalogue have been contributed by whale watch collaborators.   The North Atlantic Humpback Whale Catalog (NAHWC), curated by Allied Whale, College of the Atlantic, facilitates studies of humpback whales across all of the feeding and breeding grounds in the North Atlantic.  It also receives significant contributions from whale watching effort in the Gulf of Maine, often through collaborating NGOs.  For example, the NGO Whale and Dolphin Conservation (WDC) contributes photos to both catalogs from its activities and its partnerships with whale watch operators in the Gulf of Maine.

Over the years, whale watching data shared with scientists have contributed to over 75 peer-reviewed papers on aspects of their biology and life history4, including some of the first information on frequency of calving and reproduction5,6; site fidelity and timing of annual arrival on the feeding grounds7; distribution and habitat choice8,9;  and stock identity and movements between feeding and breeding grounds10-12.  Sightings data from whale watching platforms helped to identify Stellwagen Bank as an important area for whales and served as a foundation for its designation as a National Marine Sanctuary.  Whale watch data were also among those used by managers of the Stellwagen Bank National Marine Sanctuary to justify the re-routing of shipping traffic away from the highest areas of whale density13 in an effort to better protect endangered right whales. Whale watching data have provided insights into human impacts from aboriginal whaling14, entanglement in fishing gear15-17 and ship strikes16,18.  Whale watching vessels have often also been the first to alert researchers and authorities to whale entanglements or carcasses, allowing research and response teams to be mobilized for action19. Data contributed from whale watching were also used in a study by the Whale Center of New England that examined whether whale watching has had a negative impact on calving and survival rates of humpback whales in the Gulf of Maine (the authors concluded that it had not)20. Even directed field studies, including those that use more ‘sophisticated’ methods to understand whale biology and movements, such as genetic analysis21-23 and molecular aging24,25 have benefited from contributions  from whale watching platforms that provide insight into the life history and sighting locations of individual whales. The more complete the sighting histories are for each individual (e.g. the more photographs there are showing where that individual was at various times in its life), the more meaningful results from other studies become. 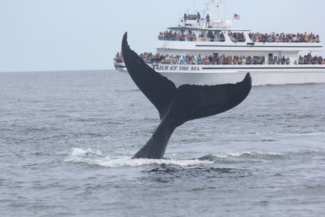 Whale watching vessel in the Gulf of Maine with humpback whale tail fluke in the foreground. Photo courtesy Whale and Dolphin Conservation (WDC). 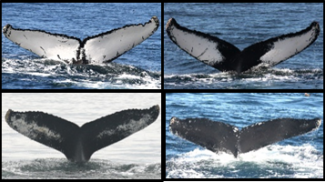 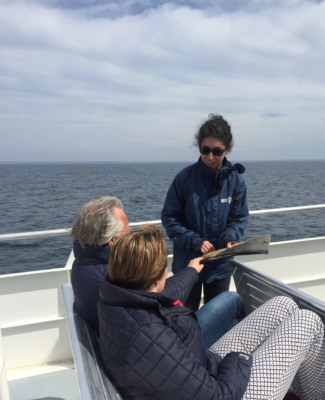 A guide shows passengers a piece of baleen during a whale watching tour in the Gulf of Maine. Photo courtesy of Whale and Dolphin Conservation.

Management and facilitation of research contributions

The growth of the whale watching industry in partnership with research and conservation efforts in the Gulf of Maine has led a high proportion of tours to host naturalist guides to ensure that they include an educational element, and data collection programs in support of science and conservation.  However, as one of the most popular whale watching sites in the world, the sheer volume of tours taking place during the busy summer season can lead to crowding and calls for robust management measures.

The US government’s National Oceanic and Atmospheric Administration (NOAA) has issued guidelines for whale watching in the Greater Atlantic Region. These voluntary guidelines include approach guidelines and diagrams. They apply to all large whales except Endangered North Atlantic right whales, for which separate Right Whale Approach Regulations have been designed with a legally enforced minimum approach distance of 500 yards (approx. 450 m).

Upon successful completion of training and evaluation, Whale SENSE businesses receive materials identifying them as active Whale SENSE participants featuring the Whale SENSE logo and the calendar year in which they have been certified.  This label helps tourists to select responsible tour operators, and gives participating businesses a way to help market their tours. 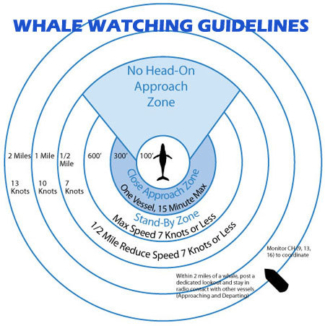 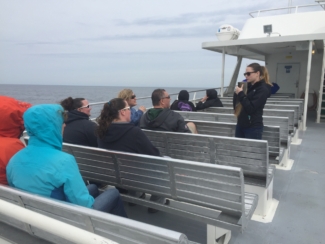 Guide on a whale watching tour in the Gulf of Maine talking to passengers about conservation issues. Photo courtesy of Whale and Dolphin Conservation