New Zealand: Kaikoura Adaptive management of an industry in harmony with traditional values

Kaikoura is a small coastal town located on New Zealand’s South Island, roughly 200km north of Christchurch.  The arrival of European settlers to these Maori lands in the mid 1800’s led to the conversion of much of the surrounding area to farm land and the establishment of a shore-based whaling industry.  This whaling industry employed local Maori fishermen to hunt sperm whales that were found in the deep submarine canyons relatively close to shore.  By the 1920’s whale numbers had reduced so drastically that hunting them was no longer profitable, and in the 1960’s the last whaling stations in New Zealand were closed1.  In the 1960’s and 70’s a recession caused economic hardship in the remote and isolated area of Kaikoura.  In the 1980’s, various stakeholders agreed to try and promote tourism in the picturesque town of roughly 2000 inhabitants as a means to stimulate the local economy. Many saw the area’s local marine wildlife – most notably its whales, dolphins and seals - as the lure that would attract tourists to the remote area.

In 1987 five local Maori families mortgaged their houses and put up their cars as collateral for loans in order to found a whale watching business that would focus on observation of sperm whales in the nearshore submarine canyons1.  A feasibility study was conducted with support from the Marlborough Development Board, and the Department of Conservation granted the fledgling business a concession to engage in whale watching activities.  The first tours were offered in July 1989.  Maori traditionally have a strong connection to the natural world, captured by the word kaitiakitanga, which expresses the Maori concept of human’s role as guardians and protectors of the environment2.  Building on the strong values of sustainability that are inherent to Maori culture and tradition, one of the first Maori owned whale watching businesses in Kaikoura determined that all of their activities must be: 1) culturally acceptable; 2) economically viable; and 3) environmentally sustainable1.

Almost simultaneously, another tour operator began to offer general marine wildlife tours which later honed in on the area’s acrobatic dusky dolphins as a target for swim with dolphin tourism3.  Both the whale and dolphin watching tours were immensely successful, growing at an estimated 14% per year, until in by 2006 they were attracting roughly 1 million tourists per year, and generating an estimated 28 million NZ dollars (just under 20 million USD) per year 1.  The increased tourism to Kaikoura created more jobs, not only for those who were directly employed by tour operators, hotels, or restaurants – but for every five full time equivalent jobs created by tourism, one full time equivalent job was created in another sector.  From 2006 onward roughly 30% of Kaikoura’s economy was based on tourism1, although from November 2016, a strong earthquake rendered the area inaccessible for almost a year, seriously affecting tourism numbers.

By the mid 1990’s there was concern that the annual number of tourists was outstripping Kaikoura’s infrastructure.  The Central government funded the drafting of a comprehensive tourism plan for the area, and local stakeholders and planners took the opportunity to ensure that this plan would be based on principles of sustainability. They engaged with Green Globe, and later Earthcheck, to obtain environmental benchmarking certification of Kaikoura’s tourism.  Planning for the next phase of tourism included better waste and energy management, enhancement of tourist amenities, and broader community engagement and development. In 2002 Kaikoura became the world’s first local government to obtain certification as a GreenGlobe21 Gold destination1.

As of 2006, over 1 million tourists per year were visiting Kaikoura, with a large majority of those staying for more than a few hours citing marine mammal tourism as their main motivation for visiting the area1.  In addition to the economic benefits that whale watching brings to the community, at least one of the tour operators in Kaikoura aims to improve the quality of lives and the environmental awareness of local community members as well.  The company provides work experience for students from the high school and the Centre for Continuing Education, donates money to local schools, and offers reduced rates to schools and community groups to participate in whale watching4. 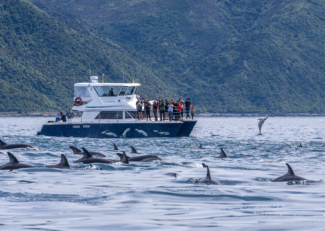 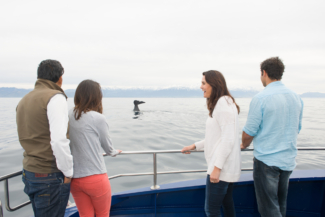 The New Zealand Marine Mammals Protection Act (MMPA) was enacted in 1978, and this led to the establishment of the Marine Mammals Protection Regulations (MMPR) in 1988 (with subsequent updates in 1992 and 2008).  As such, these regulations were already in place and could be applied to the commencement of whale watching in Kaikoura in 1989 (although they were not applied to dusky dolphin tourism in Kaikoura until 1990).  These regulations set forth the conditions for permitting of whale watching operations, as well as approach guidelines for vessels and all other interactions with marine mammals.

From the outset, strong awareness of, and intentions to comply with these regulations resulted in a positive cycle of adaptive management, through which research on the potential impacts of whale watching activities on both sperm whales and dusky dolphins resulted in management actions.  For example, in the first phase of tourism between 1989 and 2000, studies showed that dusky dolphins rested most often at midday, that they were accompanied by boats 72% of the time during daylight hours in the summer, and that infractions to the MMPR  were commonly occurring (e.g more than 3 vessels being present within 300m of the same dolphin group or incorrect approaches to dolphin groups)5.  In response to these findings, the Department of Conservation (DOC) issued a 10-year moratorium on the development of any new dolphin-watching activities6, and commercial operators agreed to adhere to a voluntary code to respect the dolphins’ midday rest period and refrain from approaching dolphins between 11:30am and 1:30pm3.

In the next phase of tourism between 2000 and 2010, studies analyzed the rate of compliance with the voluntary midday rest period, and found that a number of operators still regularly approached dolphins during this time (although not the operator offering swim-with dolphin experiences)7,8.  These studies also noted that calves were present in over 70% of the dusky dolphin groups that were approached for tourism and swimming7,8.  Swimming with juvenile dolphins is prohibited under the MMPR, but the lack of a clear definition of how to classify and recognize juveniles made this regulation almost impossible to enforce3.  Further studies found a correlation between the presence of tourism vessels and more frequent direction changes, slower swimming, increased leaping, and reduced resting and socializing among the targeted dolphin groups9.  Another study determined that male sperm whales surfaced and changed direction more frequently in response to vessel presence and circling aircraft10.   Social science research during this period also clearly confirmed that whale watching was generating important benefits for the local employment market and economy1, but also identified a potential gap in tourists’ expectations and experience, with tourists expressing desire to have more structured education as part of their tour11.

2010 marked the expiration of the first 10 year moratorium on development of new dolphin watching, and an opportunity to review and revise regulations.  In response to the studies conducted, the DOC issued another 4 year moratorium on the development of any new motorized vessel-based dolphin tourism, and revised regulations for swim-with vessels, which could take more passengers, but had to limit their approaches to dolphins (a maximum of 5 per tour).  The midday rest period for dolphins became mandatory, and the DOC announced that operators would have to adhere to a new Code of Conduct to be developed in conjunction with the DOC3.

In 2011 a multi-faceted series of studies on the impacts of whale watching on sperm whales in Kaikoura determined that male sperm whales surfaced and changed direction more frequently in response to vessel presence and circling aircraft10, and that whales’ surfacing and blow frequency also changed in the presence of tour boats that were present roughly half of the time that whales were observed12.   However, the later study also concluded that the regulations in place at that time were most likely sufficient to mitigate any serious long term impacts on the whales if current levels of whale watching pressure did not increase12. In 2012 a study noted that dolphins’ responses to vessel presence appeared to be growing stronger, with slower swimming, less resting and more milling than previously observed13.  This study also examined how these short-term reactions could affect the dolphins’ activity and energy budgets and potentially impact their long term fitness13,14. 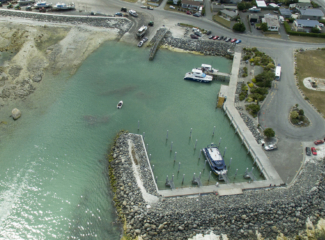 Kaikoura harbor, recently reconstructed after it was devastated by the 2016 earthquake. Photo courtesy of Dennis Buurman 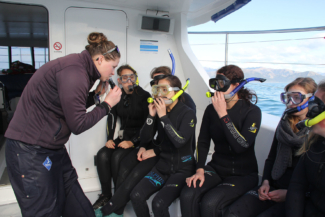 Lessons learned: Strengths and weaknesses of the Kaikoura model

The development of whale and dolphin watching in Kaikoura has repeatedly been cited as a case study that exemplifies good practice with regards to community involvement, environmental sustainability, and adaptive management involving multiple stakeholders.  Indeed, there are many strengths that can be highlighted:

A collaborative and community-based approach to management

When examining the development of dusky dolphin tourism in Kaikoura against the idealized framework for management of cetacean tourism published by Higham et al. in 200915, Lundquist found that for the most part, dolphin watching in Kaikoura provides a good real-world model for optimal management of a whale-watching industry3.  However, he also highlights a few shortfalls of the current management and recommends the following improvements for the future:

For more information about whale or dolphin watching in Kaikoura, please contact:

Sperm whale surfacing with a pronounced blow in front of a whale watching vessel in Kaikoura. Photo courtesy of Whale watch Kaikoura. 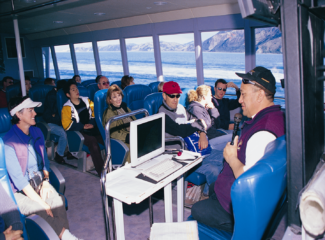