Kenya: Watamu Whale and dolphin watching as an alternative to fishing and a means of reducing marine mammal bycatch

Kenya is best known for its terrestrial wildlife – a dream destination for safaris to see the ‘Big 5’ in the iconic landscape of savannah lands dotted with Acacia trees. Few tourists associate Kenya with marine life or dolphin watching, but the country does, in fact, have an active and growing dolphin watching industry and a burgeoning whale watching industry.

Kenya’s first commercial dolphin watcthing tours were offered in the 1990s, concentrating in the northern and southern coastal areas that included the  Malindi Watamu National Marine Park and Reserve (MWMPA- gazetted in 1968), and the Kisite -Mpunguti National Marine Park and Reserve (KMMPA-  gazetted in 1978).  Both areas were traditionally fishing towns until tourism took over as the main source of revenue in the 1970s, when nature based tourism gnerated more than 1.6 million USD per year and became the m ain attraction for nearly 30,000 tourists in the KMMPA1. Marine tourism here initially focused on diving and snorkeling, but a number of fishermen, who were accustomed to spending hours on the water and carefully watching for signgs of productivity and good fishing, realized that they could supplement or increase their income by using their vessels to take tourists to see the resident populations of Indo-Pacific bottlenose dophins they knew to frequent the area. In both areas, dolphin watching took off, and as of 2017, there were 40 boat operators offering dolphin watching and snorkeling activities for domestic and international tourists in the MWMPA and 10-12 in the KMMPA.

The numbers of dolphin watching tour operators in the KMMPA in 2006 were considerably higher, raising concerns for the Kenya Wildlife Service and local research groups that the industry might be placing unsustainable pressure on local dolphin populations.  Between 2006 and 2010, Global Vision International partnered with the Kenya Wildlife Service to conduct a long-term year-round study on the KMMPA’s dolphins. The study yielded the first population estimate for dolphins in Kenya, as well as some alarming results: an increased presence of dolphin watching vessels was associated with a decrease in dolphin numbers in the protected area.  In March 2006, the highest number of dolphin tours in the park’s history  (451 boats and 6,246 tourists) was statistically linked to the departure of 78% of the local dolphin population from study area2. While seasonal temperature changes also appeared to have an effect on local dolphin numbers, the presence or absence of tourism vessels had the largest influence on dolphin numbers and shifts in and out of the study area2.  Researchers also found that the presence of boats changed dolphins’ behaviour, with less time spent traveling and more time spent diving, short-term effects that did not appear to have a significant impact at the current level of interaction, but could lead to cumulative long-term impacts, particularly if tourism activities were to expand3.

Not wanting to wait for the results of the study before taking positive action, the Kenya Wildlife Service (KWS) with support of the CMS Year of the Dolphin Initiative, proposed a local dolphin watching code of conduct to regulate the number of vessels that could approach one dolphin group, as well as minimum approach distances2. This code, combined with a decrease in tourism due to security concerns from 2008 onward, resulted in a reduction of pressure and more stable dolphin presence2. The results of this research and the apparent success of the introduction of regulatory measures in the KMMPA led the Watamu Marine Association (WMA) to begin a similar research project in 2010.  A year later, the Kenya Marine Mammal Network  was formed as a collaboration between the Kenya Wildlife Service, Kenya Marine and Fisheries institute, National Environmental Management Authority, WMA, and GVI. The Network aims to identify marine mammal hotspots along Kenya’s coast and to use accumulated data to design a country-wide marine mammal conservation strategy. A component of this strategy includes the identification of areas where, following the example of the KMMPA and MWMPA, fishermen might be able to develop dolphin and whale watching as an alternative source of income while increasing awareness of marine mammal conservation issues.

Parallel to these developments, the humpback whale stock migrating along Africa’s east coast (labelled breeding stock C3 by the International Whaling Commission) has been steadily increasing following the cessation of whaling in the Indian Ocean4. This is leading to more frequent observations of humpback whales off the coast of Kenya, and a burgeoning whale watching industry. In 2012 the first whale-focused tours were offered in Watamu, with fishermen and at least one coastal resort taking tourists out to see the whales. As of 2017, roughly 15-25 tours for a maximum of 8 passengers each are conducted per season, generating between 15,000 and 25,000 USD over a two-month period. This has developed without any specific marketing effort, and many stakeholders in the region feel that there is great potential to expand whale-watching in the region. 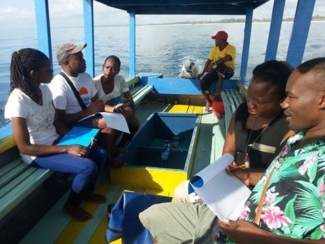 All wildlife in Kenya is protected by the Wildlife Conservation and Management Act 2013, which prohibits any activity that is likely to have adverse effects on the target species. The 2012 Kenya Fisheries Act and the Fisheries Management and Development Act 2016 under Section 46 (1)  prohibits fishing for marine mammals in Kenya fishery waters or use of any port in Kenya for purpose of equipping or supplying a vessel intended to be used for fishing for marine mammals. (2) Any marine mammal caught either intentionally or unintentionally shall be released immediately and returned to the waters which It was taken with the least possible injury.  Infractions can be punished with fines not exceeding five hundred thousand shilling or to a term of imprisonment.

Due to the rapid growth of the dolphin tourism industry between 2004 and 2006, the Kenya Wildlife Service (KWS), in collaboration with international agencies, developed a voluntary code of conduct in 2007 to mitigate possible impacts from the dolphin-watching activity. This code recommended that:

The code was based on codes for other dolphin populations around the world, as Kenya lacked scientific information from the targeted population, however, studies indicate that this voluntary code of conduct is helping to mitigate some of the impacts detected by the tourist boats during periods of high intensity2,3. 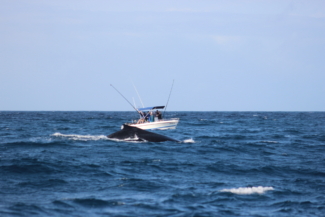 Humpback whale with tourist vessel off the coast of Watamu. Photo courtesy of Watamu Marine Association.

Since 2014 the WMA has been conducting shore-based observations of humpback whales with the aim of better understanding the seasonal whale migration in Kenyan waters and supporting whale watching activities by directing vessels to whales that are more easily spotted from a high land-based platform. Numbers of observations are steadily increasing – but sadly, so are the reports of whales becoming entangled in fishing nets. One entanglement case in 2008 and two cases in 2017 have been well documented, and it is likely that many more cases have gone unnoticed and/or unreported. The Kenya Marine Mammal Network sees the promotion of whale-watching as an alternative to fishing as part of a marine mammal conservation strategy that could have four significant benefits:

For more information about whale or dolphin watching in Kenya, please consult: The Kenya Marine Mammal Network website and the Watamu website. 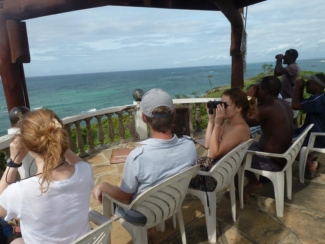 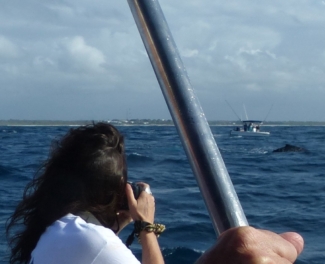 Tourist and humpback whale off the coast of Kenya. Photo courtesy of Watamu Marine Association.