Chilika lagoon is an almost entirely enclosed body of brackish water, located on the east coast of India in the state of Odisha (Formerly Orissa see map below).  It is the largest wintering ground for migratory waterfowl on the Indian sub-continent, as well as a productive nursery for many commercially important fish species.  As such, it has been recognized as a RAMSAR site since 1981.  In addition to supporting the livelihoods of nearly 200,000 fishers in 150 surrounding villages1, the lagoon is known for its natural beauty, birds and important temples in and around the lagoon.  But it is also known for its Irrawaddy dolphins – one of the only well documented populations in India.    This population was estimated to contain 95-112 individuals between 2003-20052, and population numbers appear to be more or less stable since then, although up to 7% of the population is thought to be dying each year3, mainly due to entanglement in fishing gear4. Years of study have shown that the dolphins are confined to the lagoon, with no observed movement in or out of the lagoon, and the nearest documented population of Irrawaddy dolphins occurring over 100km northeast in the Bhadrak region5 and Bhitarkanika National Park. 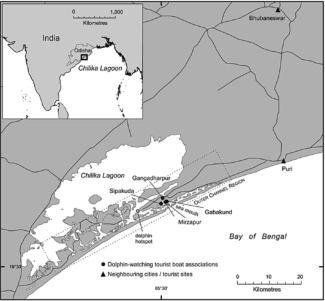 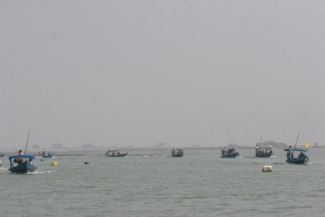 While interviews and direct observations caused researchers to view fisheries bycatch and restriction of habitat by fixed fishing gear as the most serious threat to the Irrawaddy dolphins in the lagoon, uncontrolled tourist boat traffic was viewed as the second most pressing threat4.  Addressing the threat of fisheries bycatch has been extremely difficult due to the importance of fishing as a main source of income for many of the surrounding villages.  Management responsibility for the area is shared by many different management authorities in the area (Department of Forest and Environment, State Fisheries Department, State Tourism Department, Department of Revenue, Department of Water and Irrigation and the Chilika Development Authority).  This complicates efforts to regulate tourism activities, especially as  the State Wildlife Department, which has the mandate to protect wildlife, (Irrawaddy dolphins are listed under Schedule I of the Wildlife Protection Act of India 1972), has little jurisdiction over “marine/aquatic” areas unless they are designated a Protected Area /Reserve or Sanctuary. However, failure to address the direct threats of fisheries bycatch and vessel disturbance could result in the local decline and eventual disappearance of dolphins from the area, and the subsequent collapse of a tourism industry that brings US$1.4 million to the region each year.

This builds on work conducted jointly by the Whale and Dolphin Conservation (WDC) and Chilika Development Authority in 2005, when they carried out workshops to train boat operators in approach methods. Tour operators were taught to switch off their engines in the presence of dolphins and use long poles to slowly and unobtrusively navigate in the shallow waters around the dolphins.  Many boats were encouraged to install propeller guards on their long-tailed outboard engines. 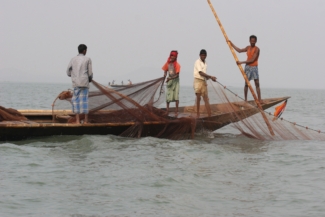 The trajectory of the dolphin watching industry in Chilika Lagoon presents both some positive and negative lessons and can serve as an example of how adaptive management is required to ensure sustainable dolphin tourism. A study published in 2016 used a standardized framework to assess the risk of harm, displacement or local extinction that tourism poses to cetaceans in seven whale and dolphin watching sites in Asia.  Based on data collected in 2010-2011, Chilika Lagoon ranked the highest of all seven sites, with the authors concluding that “…. current pressure is very high [ranking 5/5] and, because the industry has reached saturation, will remain very high in the future. This result, coupled with the insufficient response, and the potentially Critically Endangered dolphin status, leads to a risk indicator of 100/125 for India”8.

The constant pressure from vessel presence presents a serious threat to the dolphins through disruption of their natural feeding and resting behaviour.  Local research and conservation teams are considering new approaches that might better protect the dolphins, but now that the industry has grown to such large proportions, any proposed changes will not be easy.  Raising the prices for tours and re-structuring the business model to distribute the income more fairly to the boat drivers might allow the tourism associations to limit the number of tours they run and still make a profit, but it would also turn dolphin-watching into a more elite activity.  One suggestion includes raising prices considerably – and requiring associations to earmark a portion of their fees for conservation and education activities.  Whatever the approach – it is clear that any solutions are going to require a multi-stakeholder approach, and much negotiation to ensure that the industry is run fairly and in a manner that preserves the resource upon which it is based. 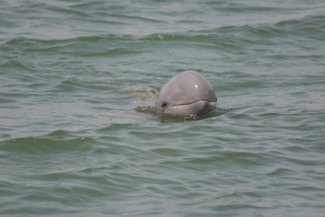