The Netherlands is not known as a whale watching hotspot.  With no formally developed commercial whale watching industry, much of the Dutch public is unaware that there are any whales or dolphins off their coastlines.  And yet, harbor porpoises are common along many parts of the coast, and other species, such as bottlenose dolphins, and increasingly humpback whales are also seen from time to time1-5.  In 2007 a group of dedicated researchers and members of the public formed the Dutch NGO ‘Stichting Rugvin’ (The Dorsal Fin Foundation).  The group’s main objectives were to contribute to the understanding of whale and dolphin distribution and conservation needs along the coast of the Netherlands and to raise awareness of these issues among the Dutch public.  A fairly small group, with limited means, the group relies on a network of roughly 30 volunteers to conduct much of its work.  To address their first objective, the NGO has set up three long-term studies: the long term and continuous collection of data through the placement of volunteer observers on the Stena Line ferry crossing between Hoek van Holland and Harwich;  the coordination of a large annual volunteer effort to count and photograph harbour porpoises in the Oosterschelde region of Zeeland; and an ongoing photo-identification project to identify individual harbour porpoises off the coast of Zeeland and monitor them over time.  Furthermore, between 2009 and 2014 the group conducted acoustic research using underwater hydrophones to monitor harbor porpoise presence in the Oosterschelde.  Through this work the NGO established that coastal waters off the town of Zierikzee host a resident group of 30-40 harbour porpoises that are present year-round, and often visible from the town’s harbor jetty.

The NGO’s founder, Frank Zanderink, began to think about ways use this newly acquired knowledge to allow members of the public to experience the same thrill and appreciation that the volunteer research team did every time they observed a porpoise  or listened to their vocalizations.  He hit upon a unique idea: an onshore listening station where visitors could hear the vocalizations of harbor porpoises in real time as they looked out to sea in this harbor porpoise hotspot. 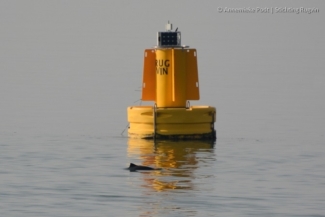 A harbor porpoise swims past a buoy that marks the position of the underwater hydrophone that allows listeners to hear vocalizing harbor porpoises from the studio on land Photo courtesy of Stichting Rugvin/ A. Podt

Turning a concept into reality

Turning this dream into a reality was not easy.  First and foremost, funding was required.   Luckily, WWF Netherlands, who had supported Stichting Rugvin’s earlier work was captivated by the concept and agreed to fund the effort.  The Oosterschelde National Park, the national ‘Nature Monuments Foundation (Natuurmonumenten) and the local municipality (Gemeente Schouwen-Duiveland) also agreed to support the project.

Next, Frank had to find a partner that could design the hardware required to record the sounds offshore, and transmit them to a station onshore.  He started with an extensive internet and literature search, hoping that someone would have created a similar exhibit somewhere in the world, but could not find a working model to use as an example.  He consulted technical organisations and universities in the Netherlands, USA,  and the United Kingdom, but those who appeared to have the necessary technical expertise and experience were either too expensive, or not available to invest the necessary time and resources for the project.  Finally, Frank found a partner based in the UK who was willing, and able to design and build the hardware within budget, and work could commence in earnest.

The end product is a hydrophone that hangs underneath a sturdy buoy roughly 350m offshore from the Jetty at Zierikzee.  The hydrophone picks up vocalizations and echolocation clicks from harbor porpoises within a few hundred metres and transmits them via radio signals to a receiver housed in a four-sided pillar covered with wealth of information about harbor porpoises.  The pillar also houses speakers that play the sounds being picked up by the hydrophone in real time when a visitor presses a button.  If there are no harbour porpoises present when a visitor presses the button, they can use their smart phone to scan a QR code that will take them to a site where they can listen to examples of harbor porpoise vocalisations.

While the speakers only play when a visitor activates them, a weather-proofed hard drive converts the radio signals to digital data that are continually recorded 24 hours per day, 7 days a week. Stichting Rugvin researchers (usually students) visit the site at least once a month to change out the USB drive onto which the data are recorded so that they can be analyzed and provide insight into the harbour porpoises’ occupancy patterns in relation to seasons of the year, times of day and tidal states.

The Studio began to operate in October 2016 with a formal launch in May 2017 to coincide with the start of the summer tourist season.   In September 2017 a counter was installed on the speaker button, revealing that the studio was attracting an average of 30 visitors per day in a month that was unseasonably cold and wet in Holland. This number must have been higher in the peak summer months before the counter was installed. 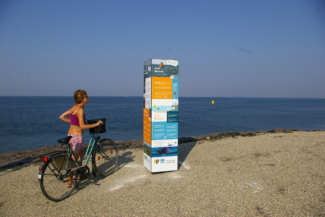 The pillar that houses the radio signal receiver and speakers that transmit real-time harbor porpoise vocalisations to visitors. Notice the yellow buoy marking the position of the hydrophone in the background. Photo courtesy of Stichting Rugvin

Like any project worth undertaking, the Studio Bruinvis project has had its ups and downs and required perseverance and determination.  However, it is a unique model that can serve as an inspiration for others who wish to promote no-impact responsible shore-based whale and dolphin watching in areas with a reliable presence of marine mammals. The strengths and challenges associated with the project below may help others to emulate this inspiring model.

For more information about shore based dolphin watching with a twist in the Netherlands, contact: 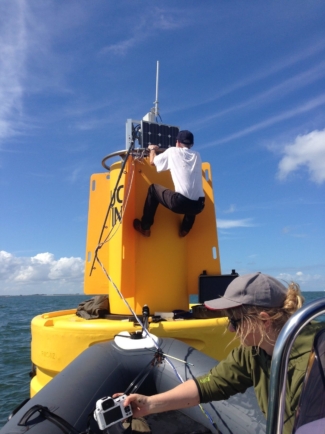