One theme that has repeatedly arisen from other case studies featured on this site is the need for effective legally enforceable regulations to manage whale watching activities.  The table of guidelines and regulations featured on this site provides multiple examples of regulations that different countries or local regulatory bodies have put in place. These regulations are often the product of multiple phases of planning and discussion between the competent authorities and other stakeholders, including scientists, NGOs, local communities, and commercial whale watching operators or associations. However, it is also important to consider the roles of enforcement agencies in implementing regulations and ensuring that they are effective in practice as well as on paper. While the section of this website focusing on monitoring and enforcement summarizes some of the methods that can be used to ensure compliance with regulations, this case study highlights the practicalities of enforcement operations with the aim of helping managers design regulations that are truly practical and feasible to implement.

Below we share a few examples and tips from the field, along with some lessons learned and recommendations for all those involved with management of whale watching and monitoring and enforcement of regulations. 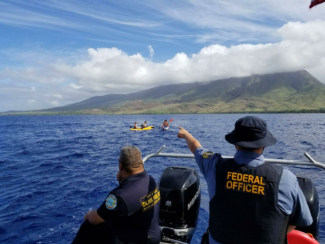 Stories and tips from the field

Incident in the Hawaiian Islands Humpback Whale National Marine Sanctuary -  the trajectory from complaints to prosecution:

On multiple occasions from January through February of 2009, the National Oceanic and Atmospheric Administration (NOAA) Office of Law Enforcement (OLE) received several complaints regarding a commercial whale watching vessel operating out of Lahaina Harbor in Maui. The captain of the vessel would often aggressively approach humpback whales within 100 yards, which is the minimum approach distance stipulated in the regulations listed here: https://hawaiihumpbackwhale.noaa.gov/management/legislation.html#hihwnms

Despite repeated warnings by other witnesses, some of which were other commercial whale watch tour operators, this individual continued this behaviour. These violations were allegedly conducted off the west coast of Maui within the Hawaiian Island Humpback Whale Sanctuary (HIHWS). Several witnesses on different occasions, voluntarily provided statements of the illegal approach incidents by this captain. These witnesses were operating commercial whale watching charters with passengers on board during these observations. Some of these witnesses provided evidence containing photographs and videos. The captain of the suspect vessel was previously interviewed in 2008 by NOAA OLE special agents and acknowledged that he was well aware of the 100 yard approach rule for humpback whales within the Sanctuary.

The challenge in this case was the difficulty in proving this illegal behaviour, as this individual was very careful not to violate approach regulations when marked patrol vessels were in the area. Evidence obtained from complainants, such as photos, videos and witness statements, were not deemed strong enough to obtain a successful prosecution.

To address this challenge NOAA OLE initiated a special undercover operation. During this operation, undercover agents were able to purchase tickets as passengers on the suspect vessel during commercial whale watching tours off the west coast of Maui within the HIHWS. During these whale watching tours, the special agents were able to obtain evidence of egregious violations approaching humpback whales within 100 yards within the HIHWS.

Once the investigation was complete, the case package was submitted to NOAA’s Office of General Counsel Enforcement Section (GCES). GCES issued a Notice of Violation and Assessment (NOVA) for multiple counts in the amount of $50,000.00 against the captain and owner of the vessel. The case was ultimately settled in federal court on Maui where the owner and operator agreed to pay a civil penalty of $30,000. 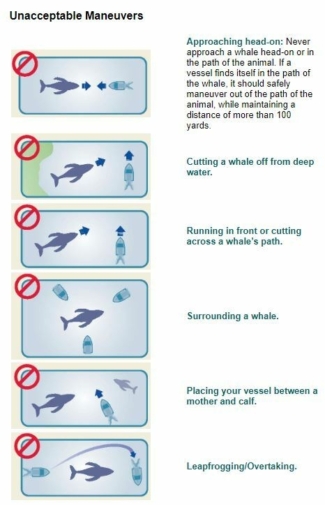 Illustrations of permitted approaches and viewing positions for humpback whales in the Hawaiian Islands Humpback Whale National Marine Sanctuary can be found under these Guidelines for Whale Protection and Human Safety. https://hawaiihumpbackwhale.noaa.gov/explore/whale_guidelines.html

Incident in New South Wales, Australia:  Harassment of a humpback whale by a jet skier

In August 2004, a jet skier was observed encircling a humpback whale at high speed for 15 minutes, approaching to within 70 metres of the whale on several occasions.  This behaviour took place off of Cape Byron, and was clearly in breach of the 300m approach rule that was in place under National Parks and Wildlife Service (NPWS) regulations.  The incident was witnessed by a Cape Byron Headland Reserve volunteer and around 30 tourists who were whale-watching from the lighthouse. The volunteer alerted Cap Byron rangers, and a coastguard volunteer was asked to rack the jet ski and driver who were later intercepted at the nearest boat ramp when he returned to shore. Although the driver initially did not admit to harassing the whale, he admitted to having been in the area with his jet ski, and witness observations and coast guard data were sufficient to prove that his was the only jet ski operating in the area at that time, and that his actions were clearly in breach of regulations.

The offender was taken to court, where a written expert statement by a globally renowned humpback whale expert supported the prosecution with information about the impacts of such reckless behaviour on humpback whales in general – including disruption of normal behaviour and heightened stress levels.  The expert was also able to interpret the observed behaviour of the whale that was being encircled, to demonstrate how it was indicative of a stress response and attempts to flee the disturbance. Together this expert opinion and strong witness statements, ensured that the court case ended in a successful prosecution and a 500 Australian Dollar fine. The court case was highly publicized and used as a warning to other marine users in the area.

Tips:  Anyone conducting surveillance activities needs to be equipped with the tools that will allow them to document any infractions that are observed.  In the case of covert operations, consideration should be given to the size and conspicuousness of items that are used. These can include:

The stories from the field in Hawaii and Australia illustrate a few elements that can be applicable to enforcement of whale watching regulations throughout the world. 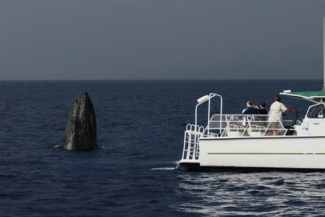 Photograph of a humpback whale in the Hawaiian Islands Sanctuary. The photograph shows the vessel clearly within 100 yards of the whale, but multiple (layers) of evidence are needed to prove that this was the result of intentional breaches of guidelines on the part of the vessel captain, rather than an inability to maintain distance when a whale approached the vessel. Photo courtesy of NOAA-Office Of Law Enforcement. 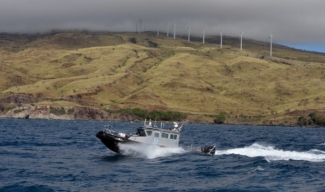