The Kingdom of Tonga is a small island nation in the middle of the South Pacific.  In 2006 its estimated population of 100,000 people was spread out over 36 inhabited islands, with two thirds concentrated on the main island of Tongatapu1.  Although the country has many agricultural exports, from the 1990’s onward, tourism has become an increasingly important source of income, estimated to account for 15% of the economy in 20061.  In 1994, this tourism included two operators who took tourists to see, and sometimes swim with humpback whales that feed in Antarctica, and come to the tropical protected reefs and Atolls around Tonga and other South Pacific islands to mate, give birth and nurse their calves.  By 2008, this number had increased to 14 operators, involving over 3,000 individual tourists in whale watching tours each year2 – with most tourists engaging in multiple whale watching tours during a single visit - an average of three tours per visit1.  The industry was estimated to generate a combined direct and indirect income of just over 2 million USD for Tonga in 20082.

The humpback whales visiting Tonga are part of the Oceana breeding stock, designated breeding stocks E and F by the International Whaling Commission3.  This population feeds in Antarctic Area IV during the Southern Hemisphere summer, and breeds in Tonga, New Caledonia, Fiji, Samoa and Niue during the Southern hemisphere winter, from July to October.  Following intensive whaling in the Antarctic, this population was estimated to number as few as 250 whales in 1964 and is now estimated to be in the low thousands4 with limited exchange between the different islands of the region5.  The population is still designated as Endangered by on the IUCN Red List of Threatened Species6.

Today there are between 35 and 50 licensed whale watching vessels in Tonga.  Of these, roughly 20% are completely Tongan owned, but many included foreign managers or owners7.  The majority of operators are on the island of Vava’u which has an international airport and is the centre of whale watch tourism, but a smaller number of operators offer tours from Tongatapu, ‘Eua and Ha’apai.

Vessels are generally smaller than 10m in length and target the sheltered waters on leeward sides of islands where they can offer guests the opportunity to enter the water and swim with whales in calm, sheltered waters.  Swimmers enter the water in groups of no more than four, accompanied by a snorkeling guide.  The preference of tours for these sheltered areas, results in the frequent targeting of mother whales with their calves, which also make use of the calm waters for nursing, particularly toward the end of the season7.

Although the whale watching industry grew at a rate of just over 15% per year between 1998 and 20082, a number of factors are considered to limit the potential for further growth1.  These include the limited capacity for air travel to the remote island nation, the limited number of hotel beds on the islands, and, perhaps most importantly, concern for the impact that the industry could have on this endangered population of whales1. 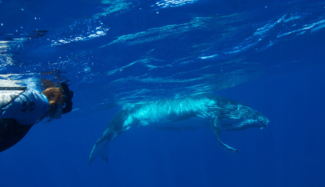 Tonga is a constitutional Monarchy, and a royal decree in 1978 banned whaling and protected all marine mammals from direct hunting. The Tongan Fisheries Conservation and Management Act 1993 offered further protections to marine mammals, but did not include any specific measures to regulate whale watching7.   The Tourism Act of 1977 allowed the government to implement a permitting system in the 1990’s that limited the number of operators that could engage in whale watching each year.  As of 2010 this was limited to 19 permits, with an allowance of two vessels per permit7.   By 2017 this had increased to 28 licensed vessels in Vava’u and approximately 7 in Ha’apai and 6 or 7 in Nuku’alofa.

In 1998 the Tongan Government, the South Pacific Regional Environment Program (SPREP) and Whales Alive collaborated to draft guidelines for whale watching, which were unofficially followed by some operators, and adapted by the Tongan Whale Watching Operators Association to form their own Industry guidelines in 2001.  For many years, these were the only guidelines in place, as subsequent draft guidelines produced for the government in 2003 and 2005 failed to be formally ratified and implemented7.

In 2008 the Whale watching and Swimming Act formalized the license application process, creating two separate categories of permits for boat-based whale watching and for in-water interactions with the whales and formally designating the Ministry of Tourism as the authority responsible for management of whale watching7.  In 2013 a comprehensive set of guidelines was formally ratified by the government, recognizing the Ministry of Tourism the authority to issue licenses, to limit the number of licenses issued each year, and to only issue licenses to those operators that can fulfil certain conditions, including: proof that the intended activities will not harm or jeopardize the whales; proof that the operator and its staff have sufficient knowledge and understanding of the whales and their conservation needs; and proof that the operator and its staff have the “required skills and knowledge to provide valued services to customers” (Ministry of Tourism, 2013).

The guidelines set forth clear approach guidelines for boat, helicopter and air-based whale watching as well as in-water interactions. Some of the key stipulations of the guidelines applicable to swimming with whale include:

The guidelines also include a clear description of the penalties for infractions – ranging from 1,000-5,000 USD for individuals to 10,000-20,000 for operators.  In 2017, inspections on licenses and guide permits were monitored through Ministry of Tourism and on the water operator behavior were monitored through Ministry of Police. The Whale Watching and Swimming Regulations, 2013 are currently under review and stakeholder consultations. 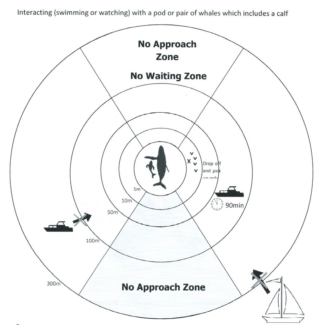 The whale watching industry in Tonga is one that is often highlighted in literature as an example of how whale watching tourism can bring benefits to local communities.  It is true that many tourists choose Tonga as a holiday destination primarily because of the unique opportunity it offers to have in-water interactions with whales in clear tropical waters that are generally sheltered and calm and safe for open-water swimming7.  However, stakeholders in Tonga, as well as international researchers are well aware of the importance of balancing tourists’ expectations and wishes and local economic benefits with the welfare of the endangered whale population targeted by the industry.

Challenges to date have included:

Recommendations and indications of improved management include:

Since this case study was published - new developments can be found on the following links: 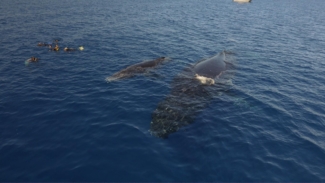 Snorkelers with a humpback whale mother and calf off of Tonga. Photo courtesy of Slim Pickens, COlabs.

For more information about management of whale watching in Tonga consult: