Dominican Republic: Samaná Bay The strengths and challenges of co-management of whale watching

The Dominican Republic (DR), which occupies half of the island of Hispaniola, has the largest whale-watching industry in the Caribbean1,2.   Whale watching in the DR was first established in 1985 from the town of Santa Barbara de Samaná (from here on referred to as Samaná). At this time, an expatriate tour operator, began to take mostly foreign tourists out to see the humpback whales that visit Samaná bay between January and March each year to mate, give birth, and nurse their young. Many more tour operators followed, and in a short time Samaná became the a whale-watching hub, both for day tours in Samaná bay, and as a harbor visited by some of the longer live-aboard tours that take visitors out to the offshore marine mammal sanctuaries of Silver Banks (established in 1986) and Navidad Banks (established in 1996).  These two sanctuaries, along with the nearshore area of Samaná cover a total area of  25,000 square km and are jointly referred to as the Marine Mammal Sanctuary of the Dominican Republic (MMSDR).

As of 2008, there were 33 whale-watching companies and 46 permitted vessels1 registered in Samaná, a town of approximately 100,000 permanent inhabitants.  By 2012, over 40,000 people engaged in whale watching in the marine mammal sanctuary during the humpback whale breeding season3 with over 90% of all whale-watchers in Samaná being international tourists1.

Live aboard tours to Silver and Navidad Banks, over 100km offshore, are expensive and as of 2008 attracted only an estimated 500 tourists per year1.  Tours in Samaná Bay, however, are more accessible, and can fall into one of three categories:

Since 2009 cruise ships have been coming to Samaná as part of wider Caribbean tours.  Each ship brings hundreds of tourists, many of whom wish to engage in pre-arranged package tours that include a 2-3 hour boat excursion. This recent development has had an impact on the dynamics of whale watching tours that are offered3.

In its first few years whale watch tourism in the Dominican Republic was not regulated.  In 1992 two non-profit organizations were concerned that boat behaviour was causing disturbance to the whales, and they cooperated to draft voluntary whale watching guidelines. Although these were adopted by the boat owners’ association in 1994, compliance was low. As such, the Ministry of Environment, the Ministry of Tourism, the whale-watching boat owners association (ASDUBAHISA), the Dominican Navy, and El Centro para la Conservación y Ecodesarrollo de la Bahía de Samaná y su Entorno (CEBSE), a local marine conservation non-profit all came together to form a co-management system for whale watching in Samaná Bay.  This system included measures for permitting operators, monitoring boat behavior, surveillance, enforcement and self-sustaining finance for administration and personnel costs1.

The regulations established in 1998 have been revised on a few occasions; the most recent revision was on May 2018. They now entail the following key measures:

In 2018, there were 56 boats with permits in Samaná Bay. Some of them have “regular” permits that allow them to whale watch continuously, while some have “rotative” permits which are shared by various boats and allow them to whale watch only one day at a time each.  As a result of issuance of authorizations, the maximum number of 43 botes/lanchas for WW operating in Bahia de Samana  is maintained.

Once permitted, a vessel is issued a flag that allows it to be identified as an officially recognized whale watching boat.  Permit fees are used to help fund the administration and running of the co-management system, which requires monitoring and surveillance.  Monitoring is conducted by government appointed inspectors/observers who accompany tours on licensed vessels and are mandated to report any infractions to the Navy.   A Ministry of Environment/Sanctuary Administration vessel also patrols the whale watching area, and this vessel as well as the Navy has the right to issue sanctions as follows:

Less formal monitoring of whale watching is conducted by the non-profit organization - CEBSE who facilitate the placement of (usually student) volunteers onboard whale watching vessels collect basic data such as whale sighting locations, and duration of encounters.  These volunteers also take pictures of flukes (tails) and dorsal fins for the identification of humpback whales.  This data is entered into a photo-identification database that is maintained CEBSE. 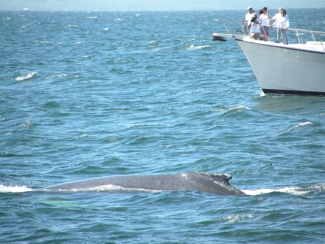 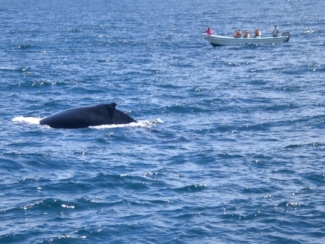 Whale watchers on a smaller boat known as a yola in Samaná Bay, Dominican Republic. Photo courtesy of Christine Gleason

The management of whale watching in Samaná Bay offers an example of a co-management framework that in many respects includes all the elements that should lead to success.

Many whale watching locations around the globe struggle to put such clear mechanisms in place, and these can serve as a model to other areas interested in establishing a co-management system.  However, as with most systems, implementation in the field is not always as clear-cut as the design appears to be on paper.  The system recognizes a number of challenges, from which others can learn:

For more information about management of whale watching in the Dominican Republic please consult: 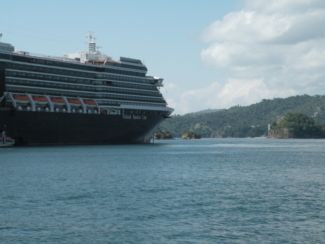